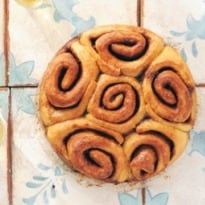 Buns require only a basic enriched dough. After that, you can add all sorts of fillings such as saffron and cream or olive oil and cinnamon.

Buns are my favourite things to bake: the lengthy knead and slow rise are perfect antidotes to my tendency to rush, stress and fuss over things. I'm convinced that if everyone indulged in the occasional, cathartic bun-baking session - just a few hours of enforced calm each weekend - there would be more than a few therapists put out of business.

All buns have in common a simple, enriched dough, but what happens next is up to you. You can make anything from sticky Chelsea buns to cream splits, doughnuts and brioche rolls; you can fill them with nuts, fruit, zest or spice or even flood them with a boozy glaze. I've stuck to the classics here - sweet cinnamon swirls and saffron-spiced teacakes.

This is a very simple saffron bun recipe, and one which I urge you to make however you see fit: perhaps with a handful of currants soaked in camomile tea, or with chunks of white chocolate or even shaped into swirled rolls with a slick of praline paste.

The double cream helps to keep these buns perfectly tender and moist, but you could switch to single cream, or even milk, if you want something a little lighter. If you do make any changes, just take care to add the liquid slowly - you'll likely find that an all-milk version will need less liquid, by volume, than the milk-and-cream one.

You can find nibbed sugar (or pearl sugar) online and in some specialist cake decorating shops, but don't fret if you can't get hold of any - a dusting of crunchy demerara sugar also works just fine.

1 Very gently heat the cream, milk and saffron until scalding. The saffron strands will soon begin to bleed their colour into the liquid, nudging it from a pale magnolia to cream to a warm buttercup yellow. You can wring more colour and flavour from the saffron by squeezing the strands against the side of the pan with the back of your spoon. Leave the mixture to cool and infuse until it's just lukewarm.

2 In a large mixing bowl, combine the flour, sugar, yeast, salt and lemon zest, and stir to combine. Add the cooled cream mixture and use your hands to work the liquid into the dry ingredients until you're left with a smooth dough. Knead for 5-10 minutes to build up a little elasticity and strength in the dough.

3 Return the dough to its bowl, cover with clingfilm and set aside at room temperature for around 1½ hours or until doubled in size.

4 Once the dough has risen, gently press it down, tip from the bowl and divide into 12 equal portions. Roll each piece of dough quickly under the cupped palm of your hand to make a rough ball, then gently pinch any rough edges underneath to give a smoother shape. Press each ball down until it's a fat disc 1-2cm thick. Arrange the buns in a large, lightly greased roasting dish or baking tray so that each bun is nearly touching its neighbours. Cover loosely with clingfilm and leave to rise for roughly an hour - or until the buns are 1 ½-2 times their original size. Meanwhile, preheat the oven to 180C/350F/gas mark 4.

5 Beat together the egg yolk and milk for the glaze and brush over the tops of the risen buns. Sprinkle with the nibbed sugar, if using, and bake for 25 minutes in the preheated oven. Leave to cool completely before serving toasted with plenty of salted butter.

I'd usually enrich the dough for cinnamon buns with butter, but I recently found that this version - laced with fruity olive oil - yields a bolder flavour. The key to a good cinnamon bun is a tender, light-textured dough, which requires patience: rest assured, it'll be worth it when the kitchen is brimming with the heady scent of cinnamon and orange.

1 Combine the flour, yeast, salt and sugar in a mixing bowl. Add the water and olive oil and mix to a rough dough. Tip the dough from its bowl and knead for 5-10 minutes - the oil should stop it from sticking to the surface or your hands too much, and it'll grow smoother as you knead.

2 Return the dough to its bowl, cover with clingfilm and leave to rise at room temperature until roughly doubled in size - it should take 1-1½ hours.

3 Once the dough has risen, stir together the olive oil, sugar, vanilla extract, cinnamon and salt for the filling. Roll the dough out on a lightly floured surface to a 20x30cm rectangle.

4 Spread the filling mixture over the rectangle of dough then roll the whole thing up from short edge to short edge to make a log around 30cm long. Trim off untidy edges, which are likely to have tapered and grown uneven. Cut the log into 6 even slices.

5 Lightly grease a 20cm loose-bottomed or springform cake tin. Arrange 5 of the cinnamon buns around the edge of the circle and place the remaining one in the centre (like the arrangement of a five-petal flower). The buns won't quite be touching - this is fine. They'll fuse as they rise and bake.

6 Cover the tin loosely with clingfilm and leave to rise for a further 45-60 minutes, until the buns are just about double their original size. Preheat the oven to 180C/350F/gas mark 4.

7 Once risen, bake the buns for 25 minutes, until lightly browned, puffy and sizzling. Meanwhile, heat the water and sugar for the glaze in a small pan and simmer for a few minutes, until thicker and syrupy. Stir in the cinnamon. Brush the syrup over the freshly baked buns while both syrup and buns are still hot, then leave to cool in the tin.

An enriched dough can be made into classic cinnamon buns and a host of other options. Photograph: Jill Mead/Guardian