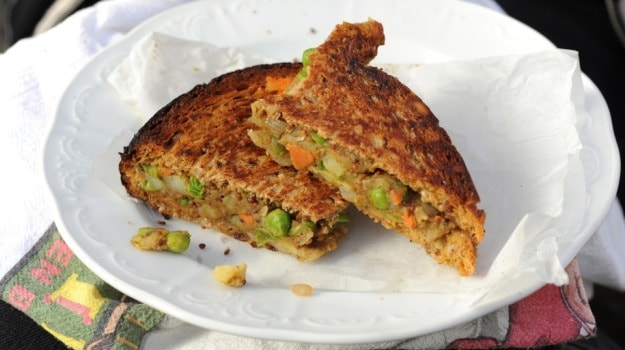 Evidently toasted sandwich fillings go way beyond cheese. Here you give the humble toastie a real lift with fillings like chipotle, chorizo, chicken, and even chocolate.

I had been looking forward to toastie week for quite some time and, from the number of submissions, I'd say our readers were equally enthused. Although oozing, melted cheese is clearly the draw in most instances, you've come up with a fantastic array of fillings.

AussieAthiest's Elvis-inspired breakfast toastie, for example, was vastly superior to the standard peanut butter on toast. I'm working up to putting a rasher of bacon in there. MarmadukeScarlet also came up with a brilliant morning treat in the shape of a Korean toasted egg sandwich; put simply, it's a cheese, ham and veg omelette, stuffed into golden, crunchy fried bread. What's not to love?

I followed instructions to the letter with Josephloveday's toasted sandwich, and it was indeed the perfect cure to my hangover. Don't be shy with the cheese, in that instance. Hangrycook's chicken and chorizo cubanos were big and bold, and certainly worth holding back some Sunday roast chicken in anticipation of being able to enjoy this the next day. Julia Austin's cheese toastie with added chipotle and chocolate gave it an earthy, spicy richness and an extra savoury hit.

The winner this week, surprisingly, involves no cheese whatsoever, although I'm pretty sure adding some would be no bad thing. Seemathobhani's carb-within-carb sandwich is richly spiced with a chunky texture. I made the potato mix in advance, then reached for it in the fridge for a fast lunch or dinner. I'm so glad Seema had some leftovers in the freezer to inspire this idea.

This derives from a dish famous in Mumbai called pav bhaji. Pav is simply a bread roll that is toasted on a pan with generous amount of butter, and bhaji is a mixture of a few vegetables and spices. I made pav bhaji and had lots of bhaji left over in the freezer so I thought of trying it with toasties.

A handful of frozen peas

1 Boil the potatoes, carrots and peas until tender, then roughly mash together.

2 Heat the oil in a lidded frying pan or saucepan over a medium-high heat, then add the mustard seeds and cumin seeds once the oil is hot. As soon as the seeds start to crackle, add the diced onion, garlic, thinly sliced green chilli and ginger. Cook for a few minutes until brown.

3 Add the passata then give it a good stir. Add the pav bhaji masala, garam masala and salt to taste. Stir again, reduce the heat and cover with the lid.

4 After a few minutes, add the mashed vegetables and mix well. Reduce the heat, cover and leave for a few minutes, taking care that it doesn't stick to the bottom and start to burn. Open the lid and have a tTaste and add some freshly squeezed lemon juice.

5 Spread butter on the outsides of the bread, then put a generous layer of potato on one slice, then top with the other. Toast in a toastie maker until golden, then repeat with the rest of the filling or keep in the fridge or freezer for another time.

This is especially good when the fat from the ham hangs out and goes all crispy. All you need now is a can of Coke and you can kiss goodbye to all thoughts of last night ... It really does the trick.

A slab of butter

A spoonful of chilli jam or sundried tomatoes, finely chopped

A large handful of rocket

A handful of grated mozzarella

1 Butter one slice of bread, then spread the other slice with the chilli jam and/or finely chopped sundried tomatoes. Or both, depending on mood. Be generous.

2 Assemble the sandwich, first by adding the thinly sliced smoked cheese, then the ham and rocket. Finish with a good sprinkling of mozzarella.

3 Butter outside and fry on a medium heat, in a dry nonstick pan for about 4 minutes per side. Flatten down with a flipper until oozing, toasty and golden.

1 Heat a large frying pan over a medium heat. Add the butter and 2 tbsp oil and gently fry the bread on both sides until a light golden brown. You may need to do this in batches. Remove from the heat and set aside while you prepare the egg mixture.

2 Beat the eggs and combine with the chopped carrot and spring onion, salt and pepper.

3 Heat a small frying pan with 1 tbsp oil over a medium heat. Make sure the bottom of the pan is well-coated with oil, before wiping away the excess with kitchen paper.

4 Pour the egg mixture into the pan and shake the pan so that it covers the bottom of the pan. Reduce the heat to low and gently cook the omelette for about 2 minutes. Flip the omelette over and cook for 1 minute until the omelette has just cooked through. Set aside to cool and then cut in half.

5 Combine the tomato ketchup with the mayonnaise and spread it over 1 side of each slice of toast.

6 Build the sandwich by adding enough cheese to cover the base of each slice of toast. Top with the ham and the omelette (trimmed to fit the toast, if you want). Add a sprinkling of sliced cabbage and top with the remaining toasted bread.

7 Gently reheat each toasted sandwich in the frying pan for about 1 minute until just warmed through, and serve.

Having a rummage through the cupboards, I found some chorizo, cheese and bread, and we had some leftover roast chicken from the weekend. I'm not sure if I'm proud of my leftover chicken creation, but what I do know is that it hit the spot in a way only a filthy sandwich could.

A small handful of mushrooms, sliced

50g of a good melting cheese (such as manchego)

1 Put the chorizo in a frying pan over a medium heat and cook until it has started to crisp up and release its oil.

2 Add the mushrooms to the pan. When they begin to turn a nice brown colour add the garlic and cook for another 2-3 minutes. Finally add the shredded chicken and parsley to the pan. Toss everything together and take the pan off the heat. Season to taste.

3 Butter one side of each piece of bread. In a dry frying pan, fry the bread butter-side down over a medium-high heat until golden. Repeat for all 4 slices. Once all the bread is fried on one side, butter the uncooked side of the bread.

4 Flip, then add the cheese to the crusty fried side of the bread, top with the filling and then add more cheese.

5 Place another slice of bread on top (fried side down) with the buttered side facing up. Repeat for your second sandwich, and place the other in a warm oven.

6 Flip each sandwich and place butter side down in the dry frying pan once again. Squash the cubano as it cooks - you want that cheese to melt and glue everything together. Once the bottom of your cubano is golden, flip it over and cook until the bread is golden on both sides and the cheese is melted.

Pureed chipotle in adobo, to taste

1 Heat a little olive oil in a griddle pan or regular frying pan. Meanwhile, assemble your sandwich. Put the cheddar on one slice of bread followed by the mozzarella. Spread a very thin layer of chipotle puree on the other slice. Sprinkle the chocolate over the mozzarella and slap on the lid.

2 When the pan is hot, cook the toastie over a medium heat for 3-4 minutes on each side, flattening the sandwich until the cheese is melted and the bread is golden.

Inspired by Elvis's favourite peanut butter, banana and bacon sandwich. Use strawberry jam instead of honey for another variation.

Spread a generous amount of peanut butter on one slice of bread, then top with the sliced banana, honey and a little cinnamon. Top with the other slice, then spread with butter on the outside before toasting.