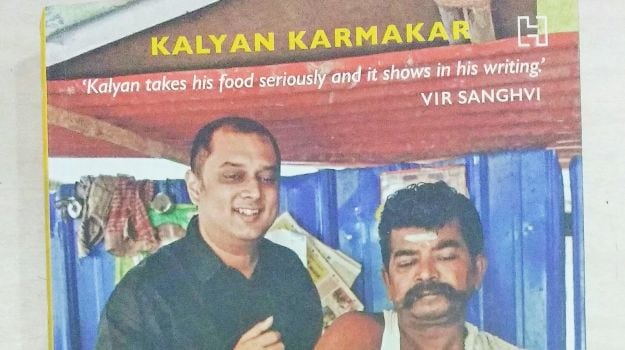 Kalyan Karmakar's blog, Finely Chopped, has managed to stir the curiosity of his followers ever since its beginning. Now he goes a step ahead, and pens down his delectable journey across prominent Indian cities in his new book, The Travelling Belly. From an erstwhile market professional to a full-time foodie, you can see Kalyan's love for food spilling in almost every page of the book. He doesn't try to make tall claims of exploring the best, instead he chooses to term them as his "favourite". The book traverses through 11 Indian cities, beginning from Kolkata, Lucknow, Delhi, Amritsar, Jaipur, Hyderabad, Bengaluru,Chennai, Goa and finally Mumbai.

"This book is not a directory of the best places to eat across India. The word 'best' is always most subjective: I prefer the term 'favourite' to 'best'," he writes in his book, clarifying his objective.

Our favourite section in his book is Mumbai. Aptly titled 'Mumbai I Love You', here you learn about how his love for food grew from a hobby to a profession. The back and forth in time from his college and courtship days to current is a good break from the 'touristy' epiphanies that cover most sections of the book. This also happens to be the longest section in the book, where he talks about his first tryst with the famous Leopold Café, one of the unfortunate sites of the infamous 26/11 Mumbai terror attacks. We read intently as he narrates how "in those days" he and his wife would wait for half an hour or more just to get a table. He speaks of Café Churchill too, and how each visit would urge him to go back to his grandmother's house because of its old world charm.

The book is also full of quite a few panegyric allegories, which also tend to get a little too credulous at times. He seems to fall in love with almost everything at first 'bite', like the khasta kachori at Vajpayee Kachori, which transported him "to the garden of Eden".

The section on Kolkata comes close second to Mumbai, if we were to rate the best sections in the book. He characterises himself as the foreign returned, spoilt spaghetti and burger eating child who slowly grew into loving Bengali food, partly for his personal circumstances, and partly for his new found interest for Bengali ranna (cooking). It is again the element of nostalgia that makes the section on the City of Joy a joyful read. And he skips the new-age eateries and mentions those places which are driven by nostalgia.And we are not complaining.As you read through the pages where he takes you through the bustling streets of New Market as fervently as he paints for you the vintage colonial décor of The Flurries and The Moulin Rouge on Park Street, you want to credit him for his expertise.

CommentsLittle trivia on Kolkata's famous delicacies are a delightful insight, such as the story of Kolkata's street side kathi roll, which was actually invented for the English Sahib as an easy-to-hold alternative to sandwiches. And that the much debated inclusion of potato in Kolkata's biryani was an outcome of Nawab Wajid Ali Shah's exile, where his entourage of cooks started adding potatoes to give "contrast to the rice" as meat was expensive.

The Travelling Belly has a plethora of quirky and delightful anecdotes. In Lucknow, our favourite bit is when an out-of-job local kebab lover at Chowk's Tunday Kababi offers to pay for Kalyan's plateful of kebabs and ulte tawe ka parantha. Delhi's ceremonial chaats, kababs and niharis find an insightful entry in Karmakar's book. However, it is the gorge-worthy descriptions of Delhi's sweets and desserts that take the cake here.

Kalyan goes out of his way and busts some major stereotypes too. Like in the section, 'Going Vegetarian in Amritsar'. He writes, "There is much more to Punjabi restaurant food than butter chicken or tandoori chicken," and recommends the puri aloo sabzi and sooji ka halwa of Kanha Sweets, which he discovered on a breakfast trip charted out by renowned chef Vikas Khanna.

The Travelling Belly is an earnest attempt of Kalyan to give you a point of view of his "favourite" foods across the country. And he does a pretty good job at penning this very subjective account. He takes painstaking efforts to reach out to the places recommended to him over his twitter interactions. Nowhere does he make presumptuous claim of 'the-best-place-to-have-this', but charts his own little 'foodwalk' at the end of the chapter, as a cue-card for you to share a similar gastronomical experience as he did while exploring these places. The Travelling Belly is an honest and hearty trail into India's by-lanes from a lover of food, for the lovers of food.