Brandy: All About the Cousin of Wine and the 4 Types 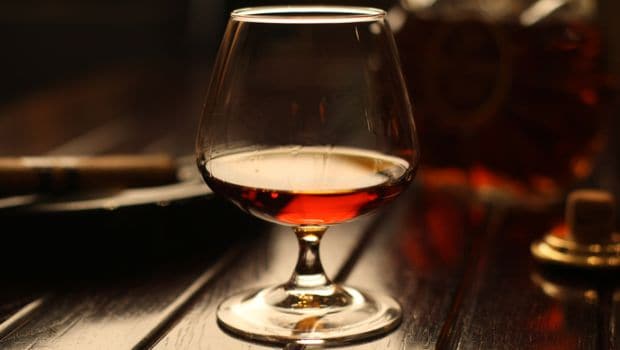 It’s easy to be transported to a gentleman’s club of Madras’ colonial era when you’re at Cheroot, ITC Grand Chola’s malt and cigar lounge. It was here that I first tried a truly special Cognac. Louis XIII de Remy Martin’s blend has been a closely guarded secret since 1874. A result of four generations of Cellar Masters, the Louis XIII is blended from 1200 eaux de vie from 40 to 100-year olds and then aged in tierçons that are centuries old. With 250 tasting notes, explosive might be a gentle word to describe this Cognac. At an average price of $ 2000-3000 per bottle, Louis XIII has often figured in popular culture as the ultimate expensive drink including a scene in the Tom Cruise cult classic Cocktail where he remarks “A $500 bottle of brandy”.

At a time when whiskey and gins are trending and bartenders are busy inventing craft cocktails, brandy seems to have taken a backseat with perceptions of staid and old-fashioned surrounding the spirit. But Brandy has survived many such waves over the centuries and remained relevant. It’s also impossible to confine brandy into a tight box given the scores of global varietals from Italian Grappa to French Cognac to Peruvian Pisco.

The term ‘brandy’ can be traced back to a Dutch term – gebrande wijn or burned wine and is distilled from wine. This heating process to separate the alcohol component from the water is heat distillation. The name stuck because brandies are often crafted by heating wine or other fermented fruit juices. But brandies can also be made from any liquid that contains sugar. Italian grappa for instance uses grape skins. The cooled vapours contain most of the alcohol and some water and very often the distillation process is repeated to arrive at the desired alcohol content. The manufacturing process is different for fine brandies that are made in small batches in copper pot stills. Fine brandies are usually double distilled and storage is a key element just like whiskey. The brandy is stashed away (after the second distillation) in oak casks and allowed to age.

Fine brandy is ready to be bottled in about two to six years but it’s not uncommon to find expensive brandies that feature blends that are a few decades old. It’s common for manufacturers to blend brandies across different vintages like the Louis XIII with a whopping 1200 eau de vie (the French term for ‘water of life’ that also refers to colourless brandy). Quite often sugar and caramel (for uniformity in colour) is added to ‘instantly’ aged young brandies to blend them with vintage brandies. Mass produced brandies usually use more inexpensive table grapes and are not usually distilled in small batches in pot stills. They are usually crafted in larger column stills but are also stored in oak casks (the casks lend their flavour to the brandy) and bottled after dilution (the alcohol content is usually much higher when they are stored in the casks).

Arguably, the world’s best known and probably the finest form of brandy, Cognac takes its name from the town in the country’s South West. Just like Champagne, the spirits here are protected by a ‘geographical appellation’ with strict norms on production – the grapes have to originate from one of the six zones/districts within the Cognac region and must be stored in Limousin casks for a minimum of 2 years. These six districts are ranked in terms of quality with the Grande Champagne (not to be confused with the Champagne region) at the top of the tree. You might be familiar with some of the grades of Cognac from VS - Very Special (the youngest brandy in the blend has to be stored for at least two years) to VSOP (Very Superior Old Pale) stored for at least four years and XO in which the youngest brandy in the blend has to be at least six years old (This will soon become 10 years as per the new rules laid out by the BINC – Bureau National Interprofessionel du Cognac). The best way to enjoy an expensive Cognac is to drink it in a classical Cognac Balloon snifter at room temperature, gradually transferring the warmth from your hands. Of course it’s not uncommon to find Cognac in artisanal cocktails across high-end bars in India.

The oldest brandy distilled in France but not as popular as Cognac given its small production volumes. The Armagnac Geographic Appellation is further South from Cognac and the spirit became popular around the 14th and 15th centuries for its therapeutic benefits.

It is typically crafted by distilling wine or fermented mash of fruits aside from grapes. These are not to be confused with fruit infused brandy liqueurs that are usually grape brandies with fruit flavours. These brandies are actually extracted from fruits as diverse as raspberries (Framboise) and cherries (Kirsch). Some of these work really well in desserts and also as digestifs. In Southern Germany, some of the Schnapps are made with fruits (also known as Obstler) like peaches, pears and apples.

It is distilled from the pomace left over after wine making, once the grapes are pressed. These brandies are usually not aged or coloured and can be stronger. Grappa (From Italy), Peruvian Pisco and Orujo from Spain are some of the world’s best known Pomace brandies.