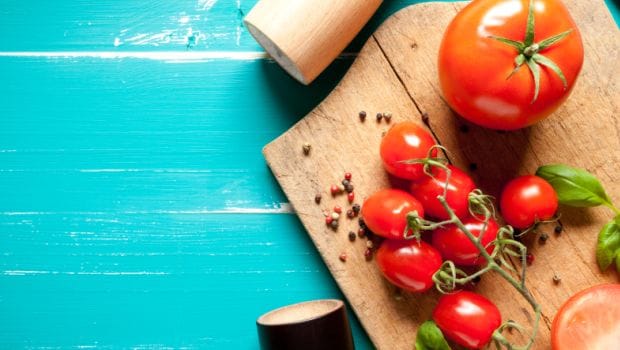 Indian meals are incomplete without the hint of tanginess lend by tomatoes. The bright red tomatoes form the base of almost all gravies and sauces. Not many know that tomatoes are actually fruits and not vegetables! Also, they have their own different breeds and all those varieties are edible. We have hardly seen them all, but recently, a particular crop of tomatoes called cherry tomatoes has etched its way into a number of dishes made in or country. We have seen them around in grocery stores but never knew what they are and how to use them. Here's a download of all the information you need to be able to bring these mini-version of tomatoes home and create some fantastic delicacies with them.

The most evident difference between tomatoes and cherry tomatoes is that the former is bigger in size than the latter.

Tomatoes are also visibly oval in shape while cherry tomatoes are perfectly round.

While regular tomatoes are sweet plus tangy in flavour, cherry tomatoes belch a slightly tart and sour taste.

Tomatoes have less water content as compared to cherry tomatoes, which are crunchier and juicier from the inside.

(Also Read: How To Grow Cherry Tomatoes At Home)

Cherry tomatoes are tarty and juicier

Cherry tomatoes are a rich source of vitamins, especially vitamin A and C. According to the nutritional data provided by the United States Department Of Agriculture (USDA), a 100 gms portion of cherry tomatoes contains 500 IU of vitamin A and 9 gms of vitamin C. The same amount of serving provides 22 kcal of energy and 4 gms of carbohydrates.

How To Include Cherry Tomatoes In Your Diet

Salad - Cut cherry tomatoes into two halves and throw them in a bowl of fresh fruits and vegetables.

Appetizer - Stick cherry tomatoes on top of crackers, salami, crostini etc. or sprinkle some salt and pepper on the tomatoes as serve as is.

Pizza - Use cherry tomatoes as a topping for a pizza. The tanginess of these tomatoes will sit perfectly with the cheese and herbs forming the top layer of your favourite dish.

Baked Dish - Cherry tomatoes taste great when baked. Add them in baked eggs or lasagne or even baked vegetables.

There are many dishes like pasta and tomato pastes wherein conventional tomatoes can be easily replaced by cherry tomatoes. It all really depends on individual tastes and preferences. Buy, we can't imagine anyone disliking the unique, fresh taste of cherry tomatoes.