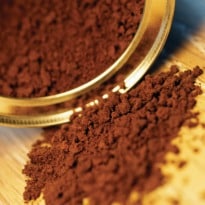 Used coffee grounds - the muck left behind in your percolator after brewing coffee - are a valuable source of bioactive compounds for producing dietary supplements, scientists report.

Millions of coffee cups are consumed every day around the world, generating about 20 million tonnes of used grounds annually in restaurants and cafeterias and also at domestic levels, says the report. Traditionally these residues have been considered as wastes and thrown away, or occasionally used as garden fertilizer.

The new report in the American Chemical Society's Journal of Agricultural and Food Chemistry by Maria-Paz de Pena and colleagues at the University of Navarra at Pamplona in Spain concludes that used coffee grounds are a rich source of healthful antioxidant substances sought after by both the food and pharmaceutical industry.

The scientists determined the amount of these useful bioactive compounds in spent coffee obtained from the preparation of coffee brews with filter, plunger and espresso-type coffeemakers common in homes and commercial kitchens. The compounds were analyzed by "high-performance liquid chromatography".

They found that the main bioactive compounds - caffeoylquinic acids, caffeine and browned compounds, including melanoidins - in the spent coffee grounds were actually four-to-seven-fold higher than in the coffee brew itself.

Promoted
Listen to the latest songs, only on JioSaavn.com
According to their report, the residues generated during the coffee brewing procedure can, therefore, be considered a new source of natural antioxidants and bioactive compounds.These compounds, the scientists said, are in increasing demand by the food industry that is looking for substitutes to artificial additives, and also the pharmaceutical industry for making dietary supplements with high nutritional value or to develop new healthy products.

CommentsThe report said the bioactive compounds can be easily extracted with water and, after extraction, the final residue could still be used in agriculture as fertiliser because it is practically caffeine-free.