Croissushi, A Cross Between Croissant And Sushi, Is A Thing Now!

A Los Angeles bakery has come up with the French-Japanese fusion dish that has become popular on Instagram. 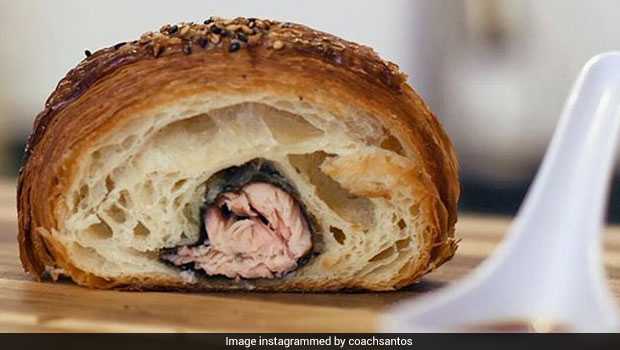 Highlights
Fusion food is hardly a new concept for foodies today, who are becoming progressively more adventurous. As crazy food trends and outlandish experimental dishes take over our social media feeds, there's something new in the market almost every other week. The latest food to be added to the list of bizarre fusion dishes this year, is the 'croissushi'- a cross between the croissant and the sushi. In case you were wondering, it looks as bizarre as it sounds.

The quirky new dish has been introduced by Mr. Holmes Bakehouse, that has outlets in Los Angeles, San Francisco and Seoul. The pioneering dish is called the 'California Croissant' and is a sort of a hybrid of the buttery, flaky, French pastry we all love and the popular Japanese seafood and rice preparation.

The dish looks like any other croissant on the outside, but in the middle of the flaky layers topped with sesame seeds, sits the stuffing of smoked salmon, wasabi, pickled ginger, and nori seaweed. The croissant is served with traditional Japanese soy sauce. The food has made an appearance on several Instagram and Twitter pages and so far, the internet seems to have had a mixed response to the French-Japanese dish.

Some people are not so thrilled about the 'croissushi', but not everyone has written it off. In fact, according to Aron Tzimas, co-owner of Mr Holmes Bakehouse, the dish has been selling out pretty fast, with their customers reviewing it as 'yummy', 'interesting' and 'creative'. Some users have urged their followers to not miss out on the dish, if they ever visit Mr Holmer Bakehouse.

Well, whether the dish tastes good or not, we know one thing for sure- it has surely got Instagram users going crazy about it.