Crunch Time: The Art of the Crisp Sandwich 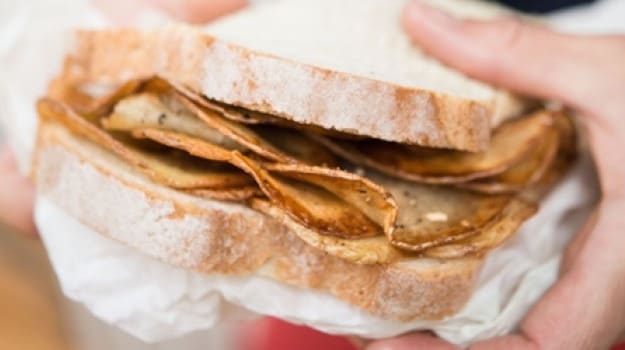 The world's first crisp sandwich shop has opened in Belfast. If you can't go yourself, here's a fun recipe for a hot, crunchy homemade potato crisp sarnie

Monday's long queues outside Belfast's Simply Crispy, the world's first crisp sandwich shop, made me smile. We spent part of our summer holidays in Ireland with my mum's large and riotous family, so I have fond childhood memories of ravenously devouring floury baps, thick with margarine, a solitary slice of ham and stuffed with Tayto crisps. I hear the cafe was offering 35 types of crisps, and that cheese and onion sold out first: rightly so - the strong flavours perfectly accompany a slice of ham.

The child in me would also have been glad to see that the cafe was offering Monster Munch - some people say it's not a conventional crisp sandwich contender. I disagree - the crunchy texture perfectly accompanied my Billy Bear meat sandwich, and the monstrous size of each crisp only added to the thrill of crushing them down to fit more in. I would get stern letters home from school if I sent my kids in with the lunches I had (thanks to the school food expert Henry Dimbleby, we got our new "lunchbox guidelines" in the children's school bags yesterday evening). But carbs in carbs with carbs (and fat!) didn't seem to do the slim seven-year-old running fanatic I was then too much harm - and what joyful memories I have. Food should be fun, sometimes, as well as nutritious, and there's nothing wrong with the occasional treat.

On the Greek side of the family, my wonderful Aunty Helen had her own homemade take on the crisp sandwich. After the six-hour drive down the coast to Plymouth to visit her, we'd be greeted by her two great big geese, Charlie and Geraldine, chasing us shrieking and honking around the garden. But the highlight of that trip was always the potato sandwiches that were hot and ready for us on our arrival, just in time for us small ones to go to bed. Oh, and in case of any doubt - we had ours with the much-maligned brown sauce.

Thinly slice the potato, with its skin, and season with salt and pepper. Heat the oil in a large frying pan, and fry the potato slices for 6-8 minutes on each side over a medium-high heat, in batches if necessary, until crisp and cooked through. Remove from the pan and pat dry with kitchen towel. Wedge between the well-buttered bread slices. Add some brown sauce or pickle for added tang.

Recipe from Jack Monroe's A Year in 120 Recipes. Order from bookshop.theguardian.com