Do You Know Your Chicken? 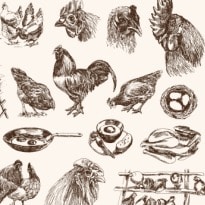 In these days of information overload, buying a chicken is a bit like buying a cappuccino. You're bombarded by queries.

Any flavor? Do you want corn fed chicken?

Any toppings? Certified organic or regular?

Here's my understanding of the difference between the various claims that cluck around the chicken label.


A bit of the background

With growing demand for meat products over the last few decades, it was but natural for meat production to become an industrialized process, which produced standardized products.

For these industries, the economics of livestock works like this - the longer you have to keep an animal alive till it reaches its slaughter weight, the higher are your costs. To get more profits, the industrial giants have started to shorten the lifespan of the animal and fatten them quicker. To do this, the animal is confined to smaller areas, given growth hormones and fed a certain diet.  It has led to crowding, confinement and selective breeding and so today livestock lives a much shorter life and under much harsher conditions than before.

This is probably why a large number of people who feel a moral responsibility towards livestock being treated badly, have come out and demanded that manufacturers put animal welfare conditions on the label. Today you can pick your meat that's been reared under better conditions. But you could get confused about the many labels out there.

Free Range Chicken
It means that the bird is not confined to cages and sheds. They have access to outdoors. Which doesn't necessarily mean that the bird has roamed across fields and grassy lands. For all you know the poor creature was given a small fenced up area to roam in.

Having said that, to ensure that the birds have adequate space, producers will have to keep fewer birds in the same area and therefore to maintain profits, they are priced at a higher rate. These are considered nutritionally superior to regular chickens.


Raised without Antibiotics
As the name suggests, the chicken was raised without the usage of any antibiotics either to prevent or cure a disease. The reason that WHO has demanded an end to antibiotics in animal feed is that it can be linked to human bacterial infections. I'm fascinated to read that there are farmers in USA who have used oregano oil as a substitute for antibiotics and it's worked.


Corn-fed Chickens
Corn-fed chickens are raised on a diet of high-corn. This gives the chicken's flesh a butter-like color and, some consider, makes it more tender and tasty.


Promoted
Listen to the latest songs, only on JioSaavn.com
Natural
It means that the chicken wasn't artificially flavored and no preservatives or chemicals were introduced after the poultry was processed. It has nothing to do with how the chicken was reared. This includes not adding water or broth to add to the weight of the chicken and increase its sodium content.


Certified Organic
Certified organic simply means that no chemical fertilizers, pesticides and animal products were used. According to USDA, it means that the chicken was allowed access to outdoors.

Comments
So if you care about what your chicken has been up to while it was alive, and whether it was allowed to lead a normal bucolic life under the sun, you might want to take a closer look at these labels.