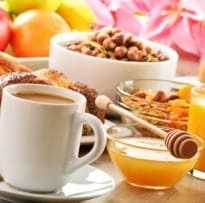 "Breakfast like a king, lunch like a prince and dine like a pauper." It's well known advice we've heard time and again from our parents, grandparents and doctors. But have we always followed it?

Breakfast is said to be the star meal of the day and for good reason. A recent study at the University of Bath's Department of Health suggests that people who eat breakfast burn more calories and have tighter blood sugar control. (Read More: Skipping breakfast could make you fatter)

The study that appeared in the American Journal of Clinical Nutrition examined the effects of eating breakfast daily versus skipping it on a person's energy balance.

The six week long study was conducted by splitting a bunch of people in two groups. One group consisted of those who ate breakfast and the other of those who skipped it. The group that skipped breakfast went on an empty stomach till 12PM each day and the other group consumed 700 calories before 11AM, reported contactmusic.com.

Contrary to popular belief those who ate breakfast experienced almost no change in snacking, portion sizes or on their resting metabolism. However, they were found more likely to expend more energy, 442 calories approximately, by being active after eating in the morning.

Listen to the latest songs, only on JioSaavn.com
James Betts, the principal investigator of the study said "Our main finding is that people who eat breakfast burn more calories. Most people would think this is because of reduced snacking and increased metabolic rate but it's actually because people start to move around more once they've eaten in the morning. Which allows them to burn more calories."As the day went on, those who ate breakfast experienced better blood sugar control compared to those who had fasted. This study gives you a great reason not to miss this most important meal of the day, especially if you are working to keep your weight down.