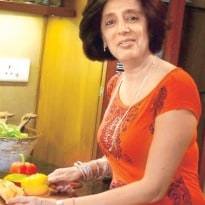 Phorum Dalal puts Anuradha Sawhney's book The Vegan Kitchen: Bollywood Style to test in her own kitchen to realize the dishes are not just healthy, but tasty too.


What inspired you to write this book?

I turned vegan in 2000, when I joined Peta. In 2010, when I got a regular health check-up, I was diagnosed with high cholesterol and my sugar was on the higher side, too. I did not consume any foods with animal fat, but I did indulge in wafers, samosa and pakodas and even consumed processed foods. For three months, I went off processed foods and did not consume any oil, even olive oil. But I craved for sweets, so I created the Chocolatey Walnut-Date Muffins recipe.


Why did you decide to take inputs from Bollywood stars?

In India, if you want to drive a point home, get a Bollywood star to say it! When I approached them, many confessed that they were not vegans but they had a dish or two their mothers or spouses whipped up for them, and that they enjoyed these vegan items in their daily diet.


Any anecdotes while conversing with the stars?

I got a lot of tips from actors. Saira Banu spoke to me about the importance of vegetables and how she would add a dash of lime to almost all her dishes to give them a tasty zing. Most of the recipes have a homely feeling. For example, Sonakshi Sinha recommends Rajma, which her mother makes. She shares that she loves to sit in the kitchen to just smell the aroma of her mom's cookingDilip and Saira Banu have contributed vegan recipes in Sawhney's cookbook. File Pic

Before we recommend something to readers, be it a recipe, a film or a holiday, we try and experience it ourselves first. So we tried two of the recipes from the book at home. They were easy to whip up and yes, we didn't burn down the kitchen!

>>Use a hand blender to mix the batter well. If it is too dry, you can add a few tablespoons of hot water

>>Add the chopped walnuts and dates. Mix once again but with a wooden spatula and let it stand for 20 minutes.

>>Heat the oven to 180 degrees Celsius and grease the muffin tray.

>>After 20 minutes, pour the batter in the tray and bake for 15 minutes or till the top cracks.

>>Note: If you don't have red pumpkin, substitute with bottle gourd. Keep the skin; it adds fibre to the dish.

SMD Verdict: It takes a sweet tooth to appreciate this recipe. And I loved it. Knowing the dish is fiber-stuffed and not sinful allowed me to gorge on it without guilt. It needed a bit of time to get used to the taste of oatmeal but so low was the calorie count that I didn't mind. The batch of muffins turned out a bit dry. Then I realized I had missed out the hot water tip.

Actor Jackie Shroff, who has shared this recipe in the book, recommends that you chop the onions just before you need them, since cut onions attract bacteria in the atmosphere.

>>Wash the aubergine and pat dry.

>>Make 8 small insertions in the aubergine and insert peeled, whole garlic cloves into them.

>>If cooking in an oven, brush the aubergine and onion with oil, put on a baking tray and place it in the oven preheated at 180 degrees Celsius.

>>If using angeethi, let the fire subside slightly and add the mango wood. Put the aubergine and onion in the angeethi and cover them completely with the ashes.

>>Roast the aubergine and onion slowly, turning them around, till their skin is charred. Remove and set aside.

>>Remove and discard the charred skin of the onion and aubergine.

>>Mash the aubergine, garlic and roasted onion, till well pureed and transfer into a bowl.

Listen to the latest songs, only on JioSaavn.com
>>Serve with bajre ki roti

>>Note: Peel the onion and keep it whole, smash the top of the onion with your fist to crack it open. This is called mukka maar pyaaz

CommentsSMD Verdict: While my cook glared at me for not putting 'enough' oil, the recipe is easy to make and took less than 20 minutes to prepare. I dug a spoon into it as soon as it was ready and the waft of charcoal burnt aubergine was heady. The stuffed garlic cloves accentuates the taste.

This Delicious, Protein-Rich Chickpea Kebab Is All About Guilt-Free Snacking (Recipe Inside)
Disha Patani's Food-Filled Sunday Is Giving Us All Sorts Of Cravings (See Pics)