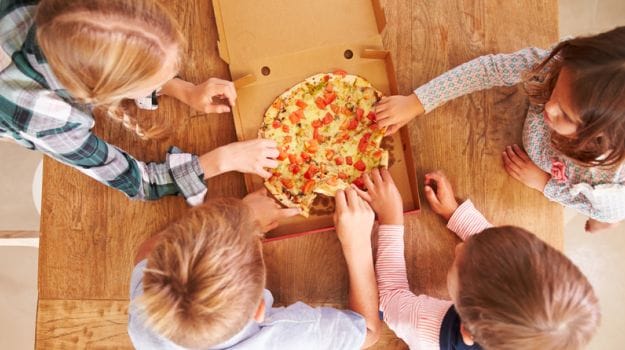 Children make quicker decisions to eat "tasty" food and reward centers in their brains light up after watching food commercials on television compared to nonfood commercials, a small study finds.

"Our past work has shown that reward centers of the brain 'light up' in response to familiar food and nonfood logos," said lead author Amanda Bruce of the University of Kansas Medical Center in Kansas City. "What this study adds is that we now have evidence that children's decisions are based more on taste (less on healthiness) after watching a food commercial."

The researchers studied 23 children ages 8 to 14 years who gave taste and health ratings for 60 food items. Afterwards, kids chose whether to "eat" or "not eat" each food item - without actually eating them - while undergoing functional magnetic resonance imaging (fMRI) brain scans.

The scans measure changes in blood flow within the brain, which is thought to reflect the activity of brain cells.

While the kids were making their decisions, they were periodically shown TV commercials, some for fast food outlets like Applebee's or McDonald's and some for nonfood businesses like Allstate Insurance and Comcast. Each set of commercials was followed by a set of 10 food choices. In general, kids did not choose foods based on their health ratings, and chose based on taste. But after watching a food commercial, taste seemed even more important to them, and they made their choices faster. The area of the brain involved in reward valuation, the ventromedial prefrontal cortex, was more active during food decisions after watching food-related commercials than after nonfood commercials, researchers report in the Journal of Pediatrics.

Food advertisements are designed to affect consumer decisions, Bruce said. "What we need to consider, though, is whether it is ethical to use these strategies on consumers who are children, as they may be at a disadvantage when it comes to healthy decision-making," she said. "What we know from studies like this one is that food marketing has effects that go beyond simply increasing our liking or wanting of the product being advertised, and actually affect our preferences for all foods in that category (e.g. snack foods or fast food)," said Emma Boyland of the University of Liverpool in the U.K., who was not part of the research, "and, as we see from this study, even the neural processes that we go through in making a food decision are affected."

It's important to understand how much the effects of food marketing are within or beyond our conscious control, Boyland told Reuters Health by email.

"Parents and pediatricians should be aware of these results so that they can put limits on screen time that involves food advertising," Bruce said. "They should also discuss with children the importance of critical thinking about commercials."

But it is very hard to keep kids from being exposed to food advertising, she noted.

"We should all be concerned about how food marketing is influencing children - so few healthy options are marketed, and if they are, the marketers are never operating with the same budget as those selling high fat, high sugar products," Boyland said. "But we, as adults, know the consequences of excess consumption and have to work to teach children that treats are treats, and that a real healthy diet to support a full and active life contains very little of the stuff they see advertised."