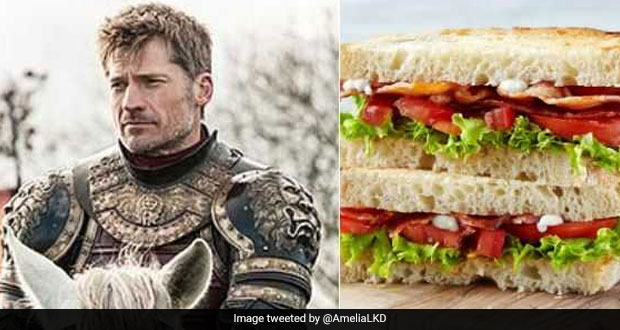 The finale episode of HBO's Game of Thrones aired today and all anyone seems to be talking about is the surprise ending that has left fans of the show divided. The episode - which marks the end of the final eighth season of the fantasy saga that takes place in the land of Westeros - has been much-awaited, and now that it's here, tweeple are busy discussing whether or not it was a fitting end to the show. We're not here to give you any spoilers of the show, so if you haven't watched the latest episode, rest assured. We're here to offer some comic relief to all the fans in the form of a viral Twitter thread posted by a female fan of the show that compared the male characters of George R.R. Martin's magnum opus to sandwiches! The thread has been garnering a lot of attention for the hilarious accuracy of the comparisons.

The thread was posted by @AmeliaLKD on Twitter and it compared the most popular men of Game of Thrones to some of the most loved sandwiches around the world. The tweets on the thread have got thousands of 'likes' and re-tweets from fans of the show around the world. The comparisons are based on the character arches and roles that these men have played in the larger scheme of things in GoT juxtaposed with the taste and texture of a range of sandwiches. The results were not just funny, but also quite insightful for fans of the show. Take for example, this comparison of one of the popular male characters of the show - Jon Snow's - comparison with plain white bread.

We've all been disappointed with how Jon's character has developed over the years and this tweet sums it up:

Sad
Lonely
White
Add literally anything else for it to be interesting pic.twitter.com/pnOx9rcrNW

Here are some more pretty accurate and hilarious comparisons of GoT men with sandwiches:

Popular
Rugged, yet classy
Something for everyone
Probably bad 4 u
Looks tempting but actually a bit limp and disappointing pic.twitter.com/z8s2TA4WqH

Reliable
Rustic yet comforting
A bit melted
Crunchy outside, soft inside pic.twitter.com/0sprx0pWtD

A classic blend of flavors
Golden tones with a little skin
Dependable
Always there for you if you're stuck for choice
A l w a y s pic.twitter.com/SPSs0knJHG

After every Game of Thrones episode, Twitter is full of discussions, debates, as well as numerous jokes about the goings-on in Westeros. Now, that GoT has finally ended, those who have watched it might experience a void that they may want to fill up hilarious GoT memes on Twitter. For the rest of the show's fans, good luck avoiding the spoilers out there. And now our watch has ended!