Patoli is not very different from that amazing Ela Ada, which is also prepared similarly, except banana leaves are used instead of turmeric leaves. 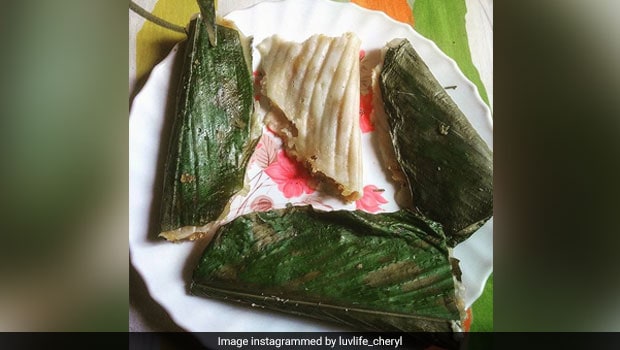 Ganesh Chaturthi began on September 2nd this year and the grand Hindu festival is being celebrated by Ganesha devotees around the world. The festival marks the birth of the elder son of Lord Shiva and Goddess Parvati. The 10-day festival brings a lot of fun and festivities along with it. Food lovers especially relish all the regional goodies that are available during this festival. Since the festival is one of the biggest ones in the western state of Maharashtra, the state's cuisine is associated with it in a big way. Apart from modaks and puran poli, some lesser known delights are also prepared by devotees during this festival. Patoli- a dessert made by steaming stuffed rice flour pancakes in turmeric leaves- is one such dish.

Patoli is not very different from that amazing steamed dessert from Kerala- Ela Ada- which is also prepared similarly, except banana leaves are used instead of turmeric leaves in the case of the latter. Patoli is prepared by making a runny rice flour batter by simply mixing it with water and a little bit of salt. Turmeric leaves are cleaned and then dressed with clarified butter or ghee. The rice flour batter is spooned on the leaves and then on top of the batter goes the coconut and jaggery filling. The filling is prepared by cooking shredded coconut meat with jaggery chunks in ghee, until the jaggery is melted. The leaves are then put in a strainer and then the strainer can be placed inside a deep-bottomed steel or brass vessel that is filled with water.

As the steam envelopes the leaves, the contents wrapped inside them cook. The sweet is ready in just about five minutes after the water begins to boil. You can remove the leaves onto the plate and open them to remove the patoli.