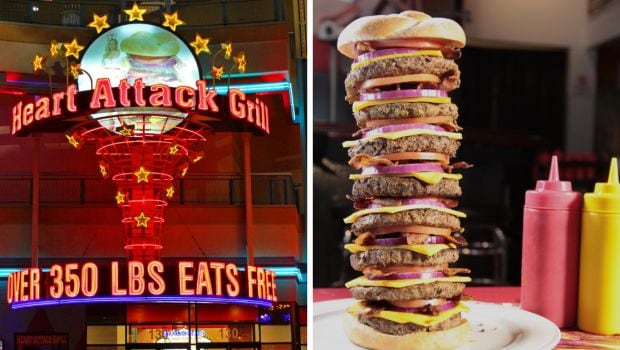 Highlights
What all can you do to prove your love for hamburger? Nothing unless you eat a 10,000 calorie hamburger at the Heart Attack Grill Restaurant in Las Vegas that serves an incredibly massive amount of food on their menu. Yes, you read that right! The name says it all. The Heart Attack Grill Restaurant is known for serving huge portions of food, which cannot possibly be consumed by a single person. Here we are to tell you what this restaurant is all about and how has it been able to stay in controversies since its inception.

The Heart Attack Grill Restaurant is a hospital-themed restaurant in downtown Las Vegas founded by Jon Basso. It is known for serving unbelievably huge hamburgers promoting and embracing unhealthy diet ever since it opened in the year 2005. Funnily, the customers in the restaurant are known as 'patients', while waitresses are called as 'nurses' and the orders have deliberate, sexually provocative names and referred to as 'prescriptions'. Every customer or patient has to don a hospital gown upon entering the premise.

The menu has a range of hamburgers including Bypass Burgers that can be of single, double, triple, quadruple, quintuple, sextuple, septuple and octuple sizes. The menu also includes Flatliner Fries and the Coronary Dog, alcohol, Butterfat Milkshakes, Lucky Strike no filter cigarettes, full sugar Cola and candy cigarettes for the kids. As per the restaurant's rule, if any customer fails to finish off the portion s/he has ordered, they get 'brutal' spankings publicly delivered by one of the nursing staff.

The high content of fat in the hamburgers served has a whopping 10,000 calories in it, 9,983 to be precise. The Quadruple burger with so many calories has been identified as one of the worst junk foods as it contains four half-pound beef patties, 20 strips of bacon, eight slices of American cheese, one whole tomato and half an onion served in a bun. The restaurant also has a ridiculously strange idea of providing unlimited free food to all 'patients' weighing over 350 pounds.

While it is a very popular eatery in Vegas, it has always been in the news for all the wrong reasons. The restaurant barely cares about the amount of risk it is offering to its customers. It is believed that there are customers who fell sick after consuming huge calorie content burgers. But it doesn't stop the founder to cut off on selling such foods. Recently, the restaurant was in the news for suing a new competitor at bay, known as Heart Attack Shack that opened in Chattanooga, Tennessee in the month of February this year; the reason being, founder Jon thinks that the Shack's owners are trying to fool customers into thinking the two restaurants are the same. Amidst all the controversies, the restaurant has managed well and people do enjoy going there. The restaurant is still in operation and continues to grow with the negative publicity it receives.

We are sure you would love to see these huge burgers, if not eat them. Do tell us if you would be interested in eating these massive bombs with so many calories?