Here's Why You Need to Ditch Ready-to-Eat Meals Now! 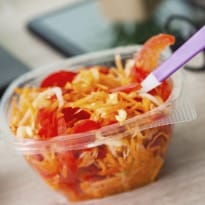 You can help yourself and your family cut down on a month's worth of calories every year by simply revisiting what you eat. Stop stacking up on those ready-to-eat-meals because even though they stand for convenience, they do more harm than good.

A research done by e-tailer Appliances Direct found that when a family of four avoids eating packaged-food, they can save on almost 2,40,000 calories a year. So an ideal option would be to cook at home and avoid eating packaged food, reports femalefirst.co.uk.

Statistics indicate that Britain is a nation of false foodies. Despite being obsessed with cookery shows like the 'Great British Bake Off' and 'Masterchef', Britain has the highest ready-to-eat meal consumption in Europe.

According to Nik Litwinenko-Jones, lifestyle nutritionist at Quality for Life Fitness, "Obesity rates have never been higher and that is largely due to our lifestyles. Our grandparents were brought up on single-ingredient whole foods and we should eat more like them."

He added, "Yet now it's too easy to opt for ready-meals packed with long lists of ingredients. As a rule, the longer the list the more you should avoid. These meals have best before dates of many weeks, meaning they are packed with salt, sugar and preservatives, thereby increasing your risk of life-threatening illnesses such as Coronary Heart Disease and Type II Diabetes."

Promoted
Listen to the latest songs, only on JioSaavn.com
More than 65 percent of Britishers admit to eating ready-made meals almost five times a week! While 57 percent buy ready-made fruit juices or smoothies, three or more times a week.Research also suggests that not only are these pre-prepared products often laden with excessive sugar, salt and fat, statistics indicate they are also much more expensive. By switching to home-made food, families could save almost 2000 pounds a year on an average and probably take a family holiday.