Paneer kathi roll is an ideal snack if you are looking for something delicious and wholesome. A rich melange of flavours and textures, this roll is sure to impress 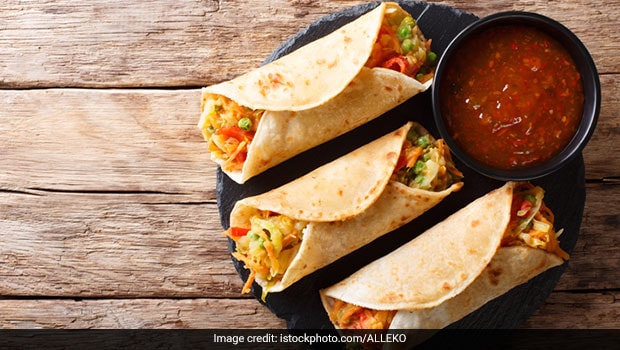 Paneer kathi roll is an ideal snack if you are looking for something delicious and wholesome.

Succulent and studded with spices, paneer tikka is a perfect appetiser and life of every party. How many North Indian weddings have you attended and not found paneer tikka in the starters, we certainly cannot think of one! Paneer tikka is mostly skewered with other veggies like onions and capsicum and served with more onions, chaat masala and a dash of lime juice. But what if we tell that this is not the only way you can enjoy your paneer tikka? Our paneer tikka kathi roll recipe is one stellar recipe that will compel you to look at the starter in a whole new avatar. Kathi roll could be called a close cousin of Frankie. There are several legends about the true origins of Kathi roll. Some say it was made so that the British in Kolkata could find it easy to grab and eat, since pairing meat with paratha was a concept alien for them. Some totally debunk this theory, and say Kathi rolls were popularised by the Nizam restaurant. They wanted to sell their kathi kebabs and came up with the novel idea of wrapping them in rolls. Soon enough, many different parts of the country warmed up to the idea of Kathi rolls and also came up with vegetarian versions of it.

Paneer kathi roll is an ideal snack if you are looking for something delicious and wholesome. A rich melange of flavours and textures, making paneer tikka at home could prove to be a cumbersome affair for few, but it is definitely worth it. This Kathi roll has all it takes to be an absolute winner. Juicy paneer tikka, slathered over with pudina chutney snuck inside a freshly-made egg paratha.

(Also Read: Love Kathi Rolls And Frankie? Read On To Know The Difference Between The Two)

It must be noted that the paneer tikkas are made on tawa and not a tandoor, therefore you need not be worried about the equipment and appliances either. The ingredients used are also fairly common and can be readily found in our pantry. You would need some maida, yogurt, ghee, eggs, onions, green chillies, paneer, salt, lemon juice and pudina chutney.Click Here For The Recipe Of Paneer Tikka Kathi Roll

You can also rule out the eggs from your parathas, if you want to make the snack slightly lighter and completely vegetarian. Paneer is a great source of protein, make this kathi roll at home and take your family by absolute surprise.