How to Cook the Perfect Chocolate Cake 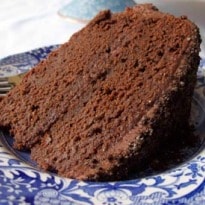 Not a torte, not a mousse, not a pudding, but a cake which actually tastes of chocolate: fluffy and light enough to eat at tea time, rich enough to serve with a dollop of creme fraiche for dessert. What's your favorite type of of chocolate cake?

A few weeks ago, I made an ever-so secret birthday cake for one of my housemates. Chocolate, naturally: the cast iron crowd-pleaser of cakes. Searching for the perfect recipe, I was surprised to discover that somehow, in nearly three years, we hadn't covered the subject in this column: a shameful omission indeed, so I turned to Twitter for advice.

Recommendations came flooding in, but one unwieldy name kept popping up, that of Scharffen Berger. The recipe in question, taken from that American firm's Essence of Chocolate book, is (according to reports) a very similar beast to the almost equally popular Easy Chocolate Cake on the BBC website. It was a shoo-in.

The birthday girl loved her surprise, and indeed "that cake" hit many of the necessary buttons: moist, dark and crumbly, it was still going strong a couple of days later. But for me at least, it lacked something. And that something was chocolate: it just didn't pack the cocoa punch I was looking for, a common complaint with chocolate cakes that look the part but don't quite deliver.

Flavour is rarely a problem with a dessert-style chocolate cake of course, a creation so rich and gooey it generally has to be eaten in teeny tiny slivers with a fork. But I'm looking for a chocolate cake in the truest sense of the word. Not a torte, not a mousse, not a pudding, but a cake which actually tastes of chocolate. And that, surely, isn't beyond the bounds of possibility.

Full of beans: the chocolate

Naturally the most important element of any chocolate cake - most recipes I use rely on cocoa powder, which provides flavour without weighing the mixture down, with the exception of Margot Henderson's steamed chocolate cake in You're All Invited, which uses melted chocolate, and Florence White's "Really Delicious Chocolate Cake" (you'll have to forgive her, the 1920s was an excitable decade), which calls for me to grate 230g chocolate into the mixture, along with some of my knuckles. This is not an experience I wish to repeat, and happily, I can report there is no need: coarsely grated chocolate creates an oddly mottled result, and doesn't melt into the cake as harmoniously as might be hoped, creating interesting pockets of chocolate.

Henderson's cake, however, is the richest, most obscenely chocolatey of the lot - not feather-light, admittedly, but then that's clearly not her intention. As I'm after a more cakey, less dense result, I decide to use a combination of cocoa powder and melted chocolate, and, at the last minute, throw in some chocolate chips to give a more interesting texture, in tribute to White.

Butter gives a pleasingly rich flavour to White's recipe and is also used by Annie Bell in her Brooklyn Blackout cake in her new Baking Bible and by Geraldene Holt in her "favourite chocolate cake" from classic Cakes. London baker Lily Vanilli adds sour cream too, which makes her version tangy and dense, while Sebastien Rouxel's recipe for Devil's Food cake in Thomas Keller's Bouchon Bakery uses mayonnaise. The explanation given is that he wanted it to be "moist and rich, but not oily from too much butter". It indeed both of those things with a wonderful soft crumb, but all I can taste is mayonnaise. I can only assume they have a special neutral number reserved for this purpose in the Keller empire, but as far as I'm concerned, it's like a weird cake-sandwich hybrid.

I'd also quibble with the term "greasy" - none of the cakes are at all oily, even those such as Nigella Lawson's chocolate olive oil cake and the Scharffen Berger recipe which use oil instead of butter. This adds extra moisture, but I think it's at the expense of flavour: I prefer a fluffier, richer result. Lawson's recipe is, however, an excellent choice for both lactose and gluten intolerant cake lovers.

Milk or water are sometimes added to the final mixture - I'm with Bell in sticking with milk. It makes her cake beautifully soft - like a snuggly warm chocolate towel, if you will.

Despite the protests from my housemates, I've decided against testing any dense, flourless cakes, good as they often are, so all my recipes use some sort of starch in addition to the cocoa powder. Flour is obviously the standard choice, but White adds ground almonds as well, and Lawson makes hers gluten-free by using only ground almonds. As well as adding their distinctive, marzipanny flavour to the cake, the nuts make the cake denser - not ideal for what I'm after, much as I love them.

Raising agents, however, are essential: only Henderson doesn't bother with any, and that's because her cake is so moist and rich that it's more like a mousse baked in a tin. White uses whisked egg whites, which struggle slightly against the ground almonds, giving an uneven rise and a slightly tough texture. Everyone else opts for baking powder, bicarbonate of soda, or a mixture of the two. I'm not sure it needs both, and baking powder seems to do the trick on its own.

Sugar-wise, fine-grained caster is the most popular choice, but Bouchon uses granulated sugar, for reasons left unexplained, and Holt suggests light or dark muscovado (pdf). I suspect dark muscovado will prove too bitter and treacly with the chocolate, but I think the deep caramel flavour of the light variety works brilliantly here, adding an extra layer of much-needed flavour.

Almost everyone adds vanilla essence to their cakes, but I don't think it's necessary: I don't want anything to distract from the flavour of the chocolate. Vanilli also adds strong coffee: I love coffee and chocolate together, but as I can taste it in the finished cake, it's out here - this chocolate cake is all about the chocolate. Holt pops in a pinch of cinnamon: a classic combination with chocolate, but I'm going to keep things simple.

Vanilli, Bell and White all use the creaming method, mixing together the butter and sugar until fluffy and using this as the base for their cakes, while the Bouchon Bakery, Lawson and Henderson whip together the eggs and sugar instead before adding the other ingredients. Both help the mixture retain air, but the first bunch seem uniformly fluffier.

Margot's recipe is quite distinct from the others, being baked for just 20 minutes then covered and left to steam until cool. It's a quite brilliant idea, giving a rich, fudgy, wonderfully silky result with minimal effort. Sadly it's not the cake I'm after, but definitely a recipe to bear in mind for future dinner parties.

Holt, Vanilli and Bell all make sandwich cakes with a filling in the middle, which I think adds both interest and extra moisture to proceedings: however nice the cake, it's always going to be more exciting with a double layer of icing. Holt goes for a frosting on top, with cocoa powder, icing sugar, butter and muscovado sugar - it's very nice but sets quite hard, which I'm not keen on. I prefer Vanilli's cocoa buttercream, although I don't think it requires double cream as well as milk.

Bell makes a chocolate custard, and slathers it between the layers of cake, blitzing one in the food processor to make a coating. Although I love custard, it doesn't have enough body for my liking here, and like Holt's whipped cream centre, makes me worry about things like refrigeration. I love the crumb idea though; it looks brilliant. To give a contrast of texture and flavour I'm going to use crushed chocolate biscuits instead - they add both crunch and a dark cocoa hit that I think works really well.

I really believe this is the ultimate chocolate cake - fluffy and light enough to eat at tea time, rich enough to serve with a dollop of creme fraiche for dessert if you'd prefer. Most importantly, it actually tastes of chocolate - and that's rarer than you might think.

1. Grease and line the bases of 2 x 20cm springform cake tins with greaseproof paper. Preheat the oven to 180C (160C fan) 350F / gas 4. Cream together the butter and sugar with ½ tsp salt until light and fluffy.

2. Sift together the cocoa, flour and baking powder. Add the eggs to the butter mixture one at a time and beat until well combined, then fold in half the dry ingredients followed by the melted chocolate. Fold in the rest, followed by enough milk to give a soft dropping consistency, and then the chocolate chips. Divide between the two tins and bake for about 25-30 minutes until firm in the centre.

3. Allow to cool completely on a rack, then make the buttercream. Beat the butter until fluffy, then add the cocoa, icing sugar and salt and, if necessary, a little milk to loosen the mixture. Put one of the cakes on a serving plate and spread a third of the icing on top. Place the second on top, then spread the rest of the icing over it.

Listen to the latest songs, only on JioSaavn.com
4. Blitz the biscuits to a fine crumb in a food processor and sprinkle them over the cake.

It's a contentious subject, but what's your favourite kind of chocolate cake: rich and dark, light and fluffy, Devil's food, Curly Wurly or Mississippi mud? Are you an icing or a ganache lover - or should a good cake come unadorned? And just why are so many chocolate cakes more a feast for the eyes than the stomach?