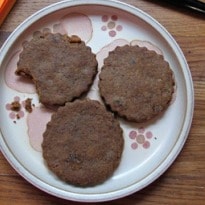 How do you ensure that satisfying snap when you bite into them? What do you add for that fiery sweetness? And where should you hide the biscuit tin?

The ginger nut, despite belonging to a well-connected European family of spiced biscuits that also includes more festive gingerbreads and peppernötts, is nevertheless a sturdy workhorse of a baked good - an everyday dunker, rather than a weekend treat.

It is the kind of no-frills biscuit you might find in an office tin, which is not to denigrate it: indeed, a few years ago, it was named the top dunker in a vaguely scientific-sounding study. The name, which may be the most exotic thing about this particular recipe, is a shortening of the original gingerbread nut, and refers to the fact that, originally, these biscuits tended to be smaller, and rounder than their modern equivalents.

But, though the bought version will always have a certain nostalgic appeal, after our recent success with the mighty digestive, I'm convinced it is possible to do better. Even the humblest of biscuits deserves a bit of love after all.

I enlisted a wider tasting panel than usual, taking advantage of a captive audience of enthusiastic food writers to do the honours - and the general feeling was that many of the biscuits were not spicy enough. We all wanted some fire in our nuts, if you'll forgive the image, and Delia Smith and Mary Berry's biscuits were just a little too genteel. Ginger should be the predominant flavour, but small quantities of nutmeg, cinnamon and allspice will all enhance its fiery sweetness. It is possible to overdo it though; Mrs Beeton puts so much spice into her biscuits that they make a fair few people cough.

Soft brown sugar is popular, with Beeton, Justin Gellatly's Bread, Cake, Doughnut, Pudding and Claire Clark's Indulge using dark muscovado and Berry going for the light version alongside demerara; only Smith sticks with white sugar. Though I love its rich flavour, the moisture content of muscovado makes the finished biscuit too soft for a proper ginger nut. Demerara has a more interesting flavour than Smith's granulated, but still supplies that pleasant crunch. Treacle, rather than Gellatly, Smith and Berry's golden syrup, will take care of the bitter aspect of things.

Puzzlingly, many recipes use self-raising flour, even thought soft and airy are the last words I would use to describe a proper ginger nut, but a little bicarbonate of soda will help the biscuits brown. Most ginger nut recipes are lubricated with butter alone, but Clark and Berry also add a beaten egg, which is just the kind of moisture-heavy ingredient I'm trying to avoid.

Beeton suggests adding candied peel to her biscuits, which is a decent match with the spices, but we all prefer Gellatly's stem ginger, especially the crystallised variety, which supplies a little crunch as well as an extra hit of spice. Clark sprinkles her biscuits with sugar before baking, but I can't detect this in the finished article. She also likes to dip them in melted chocolate, which I reluctantly decide would give them an unfair leg-up in a contest that's never really going to be about the chocolate.

Whatever their walnut-shaped history, modern ginger nuts should be relatively flat, like Smith or Gellaty's, rather than puffy, like Berry's, so they snap satisfyingly between the teeth, rather than remaining soft and fluffy inside. Berry's are more like cookies; delicious, but not the real deal. Chilling the dough before shaping, as Gellatly and Clark's recipes demand, makes them easier to mould, while a lower, slower baking process, like Gellatly's 20-22 minutes at 140C (gas mark 1) as opposed to Smith's 10-15 minutes at 170C (gas mark 3.5), seems, somewhat counter-intuitively, to give a crisper result, perhaps because the biscuits have time to cook through before they over brown on top.

Sift the flour, bicarbonate of soda and spices together in to a large mixing bowl, or the bowl of a stand mixer, making sure they are well combined.

Add the butter and, if making by hand, rub in before stirring in the other ingredients to make a dough. If using a mixer (which will be easier) just add the butter, sugar and treacle and mix until well combined, then mix in in the crystallised ginger.

Bring together into a coherent dough, roll out on a lightly floured surface to about 1cm thick, wrap in cling film and chill for about 2 hours.

Heat the oven to 140C (fan)/160C/gas mark 3. Cut out the biscuits. Arrange, well spaced out, on two lined and buttered baking trays, then bake for 25 minutes.

Allow to cool on the baking tray for 10 minutes until they have firmed up a bit, then transfer to wire racks to cool completely.