How to Make the Perfect Granola 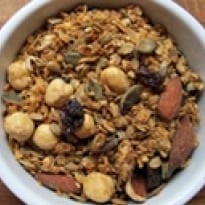 Granola - muesli with pretensions, or breakfast of the gods? Do you like it sweet and spicy, plain and puritan, or would you argue for a more savoury substitute first thing?

I have to admit that, before this week, I wasn't a granola fan. I'm a die-hard muesli addict (come on, this is the Guardian, what did you expect?), so sugary big-brand crunches were never going to appeal to my puritan sensibilities - if I'm going to indulge myself at breakfast time, it's going to involve something much more interesting than cereal, thank you very much.

What I find particularly irksome is the way such products are often marketed as a health food; Seb Emina (aka Malcolm Eggs) nails it in his book, The Breakfast Bible: "in the popular imagination, granola is to the world of mainstream breakfast cereals what folk music is to throwaway pop ... it's unprocessed and authentic". In other words, it's the Mumford and Sons to Frosties' Justin Bieber, with all that implies. But, despite the Mumford connection, the concept is a good one. Granola involves the same base of cereals, seeds, nuts and fruit as muesli, but bound together with something sticky and sweet, and, more importantly, toasted for maximum flavour.

Of course, if you make your own, you can add as much or as little sticky stuff as you like - and leave out all those horrible banana chips or dried pineapple chunks in favour of something you'll actually be pleased to spot on the spoon. In the case of this recipe, once you've got the base, the other elements are largely a matter of personal preference, so muck about with it. Breakfast is too serious a matter to settle for second best.

Oats form the base of most granolas, but not just any oats; as Emina and Gail's Artisan Bakery Cookbook helpfully specify, jumbo rolled oats will give a far more satisfying result than the rather measly ordinary sort (bigger grains stand up better to the sticky coating and baking process). Emina, to my slight surprise, is the only one to suggest cutting the oats with another cereal - he uses rye, but spelt, barley, quinoa and rice would all work, along with many others. Oats are nice, but variety is the spice of life and the only limit is the aspirations of your local health food shop.

Granola-makers are obsessed with the wholesome properties of seeds. Andy Rolleri, who Nigella Lawson claims makes "the best granola you'll ever taste in your life" uses sesame and sunflower, Gail's and Emina choose sunflower and pumpkin, and Bon Appetit magazine and David Lebovitz keep it relatively restrained with just sesame and sunflower respectively. I find sesame too strong, and sunflower seem to get lost, so personally I'd choose pumpkin seeds, which have the bonus of adding a nice burst of colour to your bowl.

They're also nuts about nuts, but so am I, so that's fine; recipes suggest, variously, almonds, hazelnuts, peanuts, pecans, walnuts. Bon Appetit uses a mixture, which is also fine by me (though I also chuck in some pistachios and macadamia nuts, because I like them). Really, the only important thing here, as far as I'm concerned, is that you coarsely chop the larger ones. Using whole almonds, as Emina, Rolleri and Gail's suggest, means you're likely to get a few very nut-heavy mouthfuls, rather than an even distribution.

Coconut shavings seem to be popular in American granolas, and though the idea seems suspiciously exotic, these larger pieces (as opposed to the desiccated dusty stuff) actually work very well, adding a touch of toasty sweetness. Lebovitz, who admits that "just like 'muffin' is basically another word for cake, granola doesn't have to be strictly 'health food'", adds chocolate chips to his as a "bonus". I find myself reaching into the jar for another handful every five minutes from about 11am, but chocolate for breakfast isn't really my thing. If you have a sweeter tooth, try and find what he describes as "baking-resistant chocolate chips", because the ones I buy melt into a gooey mess.

All the recipes I try include too much fruit for my liking, but that's a personal thing, so I've left the ratio to your discretion. The most popular raisins and sultanas are too sweet here; Bon Appetit's sour cherries or cranberries work better, though dried apricots and finely chopped dates are also good in moderation.

The final word on this subject should probably go to Seb Emina: "Do not fret too much if you are lacking any one component. Haven't got hazelnuts? Use brazils! Short on pumpkin seeds? Top up with flax! Don't know what flax is? Don't worry, it's not that nice."

What makes this jumble of ingredients more than muesli is the addition of sticky stuff and fat to bind them together into crunchy little nuggets of deliciousness. Emina uses honey, Gail's golden syrup, Lebovitz maple syrup, Bon Appetit agave syrup and Rolleri brown rice syrup - they're all much of a muchness in terms of effectiveness, but honey has the best flavour, and certainly works out cheaper than its nearest rival to my affections, golden syrup.

That's not always the end of the story; Rolleri uses apple sauce as a further binder, while Bon Appetit opts for beaten egg white. Strange as this sounds, the latter makes its granola addictively crunchy, so I'm going with that.

While I love the idea of Lebovitz's peanut butter, even the most worthy brand makes the granola feel too sweet and heavy for me. Fat-wise, a neutral sunflower oil is the most popular choice, used by Emina and Rolleri. Gail's goes for butter, which, in conjunction with golden syrup, makes the granola too much like a flapjack for breakfast comfort (if you're after something to nibble with a cup of coffee, look no further), but neither can hold a candle to Bon Appetit's sweet and nutty coconut oil. If you can't find it (large supermarkets, Asian specialists and health food shops should stock it), olive oil makes a very decent substitute.

On a more practical point, Emina and Gail's heat their syrup and fat together before stirring it into the mixture, which gives a more even coverage.

I'm with Emina here; the granola doesn't need any extra sweetness. If you disagree, however, I found the soft brown sugar favoured by Rolleri, Bon Appetit and Lebovitz worked best with the other flavours here. White sugar for breakfast just feels wrong. A hefty pinch of salt balances out the sweetness of the honey - again, I've left the exact amount to your discretion as the Bon Appetit recipe I enjoy so much is deemed unpalatably salty by one cleaner-living tester, but I do like my granola to have a slight savoury edge.

My growing anxiety that I have hopelessly pedestrian breakfast tastes is only exacerbated by the wanton use of spice in many of the recipes. Rolleri, Gail's, Bon Appetit and Lebovitz pop in cinnamon, with Gail's also using nutmeg, cloves, vanilla and lemon zest, and Rolleri adding ground ginger. I wonder if they're trying to give me a heart attack - such lovely raw ingredients don't deserve to be buried under an avalanche of aromatics.

If you heed one piece of advice from this column, it should be don't overcook your granola. Rolleri recommends baking it for 40 minutes to an hour at 170C, which makes the nuts and seeds taste distinctly burnt. Emina's half an hour at a far more moderate 150C will do the trick; keep stirring if you want a looser texture, but let it clump to its heart's content if you prefer it chunkier.

Let it cool completely before adding the fruit, and then dollop over fruit or yoghurt, drown in cold milk, or simply eat straight from a jar with a spoon. It may not be muesli, but it's a pretty great substitute.

Heat the oven to 150C and line a baking tray with greaseproof paper. Put the oil, honey and salt together in a small pan and heat gently until the oil has melted and they're all well combined. Take off the heat and allow to cool slightly.

Mix the dry ingredients, apart from the fruit, in a large bowl. Stir the honey and oil into the bowl until well distributed. Beat the egg white in a separate bowl until frothy, then toss with the mixture.

Spread out on the baking sheet and bake for about 30-35 minutes until golden, stirring occasionally so it cooks evenly, and more regularly if you'd prefer a looser texture.

Leave to cool and crisp up on the tray, then stir in the fruit. Store in an airtight container.