How to Make Your Own Sangria 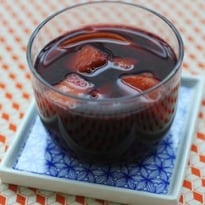 Sangria is the queen of holiday drinks. It's a cinch to make and won't leave you too groggy.

It's the running of the bulls in Pamplona this weekend, the festival that introduced Ernest Hemingway to bullfighting and inspired his book Death in the Afternoon. Pamplona could be said to have done more for literature than for animal liberation.

He did occasionally go for the softer stuff and had a particular fondness for sangria, served in pitchers so cold that they "beaded over quickly". Sangria is the queen of holiday drinks. It is cold and refreshing. If you put enough fruit in it, then it feels more like a light snack than an alcoholic beverage.

Unlike wine (or, heaven help you, Death in the Afternoon), you can drink it during the day without risking a groggy afternoon head. As my fellow Guardian columnist Angela Hartnett put it to me: "Beware the 12pm bottle of Vino Collapso."

Soaking all the ingredients overnight is critical to making a good sangria. Lemonade is occasionally used instead of sparkling water, but not by us. And feel free to "Pimm's it up" with mint and masses more fruit.

On this logic, sangria is not only the queen, but the most moral of holiday drinks.

Make your own sangria

1 Mix all the ingredients, except the water, and leave overnight in the fridge. Transfer the sangria base into 1 or 2 large jugs and top with sparkling water, if using. Stir well and serve.