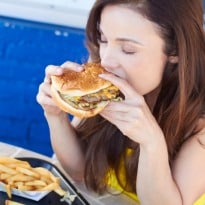 Like alcohol or other drugs, impulsive behaviour may lead some people to develop an unhealthy relationship with food. Researchers have found that people with impulsive personalities were more likely to report higher levels of food addiction - a compulsive pattern of eating that is similar to drug addiction - and may lead to obesity.

"The notion of food addiction is a very new one. We think it's possible to think about impulsivity, food addiction and obesity using some of the same techniques used for alcohol or other drugs," said James MacKillop, associate professor of psychology at University of Georgia's Franklin College of Arts and Sciences.

Certain types of food hijack brain circuits and lay the foundation for compulsive eating habits that are similar to drug addiction, he added.

The study used two methods to determine levels of food addiction and impulsivity among 233 participants.

Researchers then compared these results with each participant's body mass index, which is used to determine obesity.

The research would help experts plan treatments and interventions for obese people who have developed an addiction to food, paving the way for a healthier lifestyle, said the study published in the journal Appetite.

Foods that are high in fat, sodium, sugar and other flavoured additives appear to produce cravings much like illicit drugs.

Promoted
Listen to the latest songs, only on JioSaavn.com
"We would now work to see how those intense cravings might play a role in the development of obesity," added MacKillop.