Chicken sukka is an intensely flavourful dish, made with host of spices, freshly grated coconut and just two tablespoons of oil. 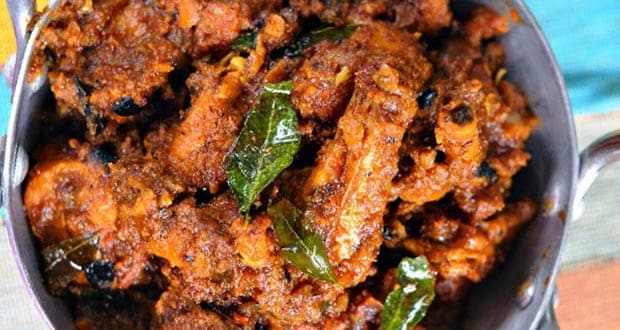 Indian cuisine, just like the country's culture, is diversified and has a rich history of its own. It consists of a variety of regional and traditional cuisine that differs from place to place, as per its soil, agriculture, climate, ethnicity, historical events et al. Every state has its own special food culture that takes Indian cuisine to the global platform of gastronomy. One such example is Mangalorean cuisine. It is a collective name given to the food culture of the diverse communities in Mangalore. Since Mangalore is a coastal town, the food culture also experiences a huge influence of ingredients like coconut and curry leaves.

Discussion about Mangalorean cuisine cannot be completed without a special mention to the popular dish chicken sukka. Also called kori sukka or kori ajadina, this dish is native to the Tulu community (an ethnic group native to Southern India). For the unversed, the word 'sukka' is derived from Hindi word 'sukha', which means 'dry'. However, this preparation of this dish has two variations- dry and semi gravy.

Chicken sukka is an intensely flavourful dish, made with host of spices, freshly grated coconut and just two tablespoons of oil. A quintessential chicken sukka calls for a special masala called kundapur masala powder. However, there are different variations of this recipe that can avoid the usage of this powder.

Here we bring you one such simple recipe of Mangalorean chicken sukka that can be made with some basic spices available in your kitchen including coriander, cumin, black pepper, mustard etc.

Click here for the recipe of dry Mangalorean chicken sukka

Although this dish has a major influence of South Indian and coastal cuisine, chicken sukka has a charm of its own. It is said that traditionally this dish is cooked with 'desi murgh' (free-range chicken) and served during special occasions like weddings.

This lip-smacking dish is best enjoyed with dosa and parotta. So try it at home today and make your meal look exotic. Happy cooking!