Sooji ka halwa is traditionally made with loads of ghee, elaichi, dry fruits and sugar. Other than its rich taste, sooji is known to have high nutritional value. 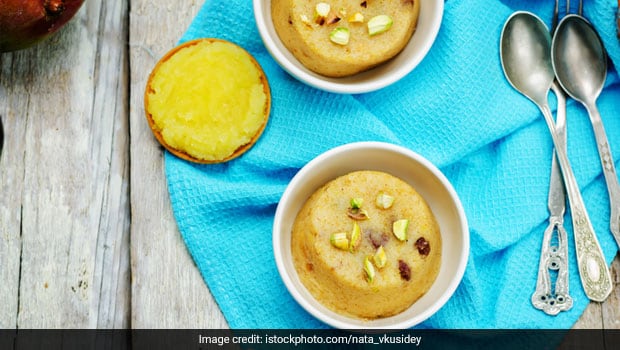 Can you find anyone who will say no to a bowl of flavourful sooji ka halwa? The answer will surely be 'no'! This classic Indian sweet holds an important place in our food culture - be it in form of dessert or prasad during any religious festival. Made with semolina, this halwa has different names in different parts of the country - it is called sheera in Maharashtra, sooji ka halwa or Mohan bhog in North India, lapsi in Gujarat and sajjige in parts of South India. It is said that a sooji-like recipe is also served in the European countries and the United States and is called semolina pudding.

Sooji ka halwa is traditionally made with loads of ghee, elaichi, dry fruits and sugar. Other than its rich taste, sooji is known to have high nutritional value. It is packed with healthy carbs, iron, calcium, magnesium, zinc and has zero cholesterol. This healthy food grain, also called rava, is touted to boost energy, improve blood circulation, and maintain healthy nervous system and more. Although this grain is famous for its multiple health benefits, sooji is often dubbed to have side-effects in people with wheat allergy. Hence, people with wheat allergy are advised to avoid sooji-based foods.

Whatever it be, 'halwa-poori' has been a popular breakfast dish since ages. The best part is, sooji ka halwa can be easily cooked at home in no time. Hence we bring you a foolproof recipe of the classic dessert that may remind you of 'ma ke haath ka swaad'. Try the recipe at home and let us know your feedback in the comment section below.

Also Read: From Mirchi Ka Halwa To Haldi Ka Halwa: 7 Interesting Indian Halwas You May Have Not Tried Yet