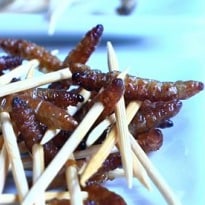 The menu includes crickets and wax worms on toothpick skewers for dipping in a fountain of melted chocolate, along with "tarsal toffee" made with bug legs and mealworms and fudge infused with crickets and marshmallows.

The bug feast was served up at the Audubon Butterfly Garden and Insectarium in New Orleans. The 23,000-square-foot (2,100-square-meter) facility is the largest free-standing museum in the United States dedicated to insects. It houses thousands of live bugs, including beetles, cockroaches, wasps, bees, ants and termites. It also has a butterfly exhibit created to resemble a Japanese garden.

Insect-infused cuisine is also a huge draw. Thousands annually visit the museum's Bug Appetit kitchen, where six-legged critters and worms are cooked and served. There is a Tiny Termite Café with bug-free foods for the less-adventurous eaters. "We get every range of reaction in here," said Zack Lemann, the museum's animal and visitor programs manager. "There are people who come here knowing about Bug Appetit, and they come to eat the bugs. We also have people who have trepidation and anxiety. Some just won't try it."

Chocolate chirp cookies with crickets (AP Photo/Audubon Nature Institute)
Lemann said the Food and Drug Administration allows 60 or more microscopic insect fragments for each 100 grams of chocolate -- so it's not a huge leap to just go ahead and have a whole bug. The chocolate-infused bug fare was being offered as a special "treat" alongside the museum's year-round offerings of chocolate "chirp" cookies -- made with, yes, crickets -- sugared wax worms and spicy Cajun crickets. Comments"I wish I could get her to eat vegetables like she eats bugs," said Val Russell of her 8-year-old daughter, Porter, who ate three chocolate-dipped wax worms and went back for seconds of the cricket-infused fudge.