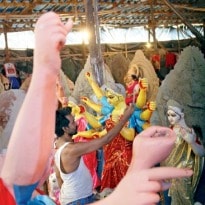 What is a festival without food? Mumbai, with its cosmopolitan vibe celebrates its culinary flavors with fervor, much to a food lovers delight. Depending on the kind of foodie you are, Dhara Vora has put together a food trail to the best, yummiest and most authentic Bengali and Gujarati fare, as you swap from dandiya raas venues to Pujo pandals.

Go back in time at Bijoli Grill where food will be served the way it was at traditional weddings in Kolkata several years back. Bijoli Grill will have unlimited portions served of several Bengali specialities such as Aam Porar Sarbot, Fish Fry, Sorshey Narkol Phoolkopi, Mutton Chop and Patol Kasha as a part of it's Sharad Utsav celebrations.
For: Rs 649 plus taxes
At: Bijoli Grill, Hakone Bumpers & Rides, opposite Nirvana Park, Powai.
Call: 65286604
Navratri Vegetarian Special
Pic/Omkar Gaokar


Promoted
Listen to the latest songs, only on JioSaavn.com
Get a dose of Kolkata, with home-cooked flavours multiplying the juiciness of the fish, and the sweetness of Rosgullas at these Pujo Mandals.