Make Your own Raspberry Mojito 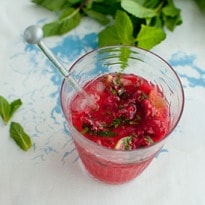 A raspberry version of the refreshing mint and rum cocktail - a winner on hot sunny days or to remember a sizzling summer by.

The particular genius of the human race is our ability to copy, and adapt, each other's ideas. Cooking is a prime example. If the early humans hadn't adopted each other's newfangled inventions - fire, roasted meat, cultivated crops - we'd probably be extinct by now.

Every culinary creation, however outré, has its antecedents. Just as Einstein's theory of relativity would have been impossible without Newton's mechanics and Leibniz's calculus, so Blumenthal's snail porridge could not have existed if the Scots had not invented skirlie, or the Romans hadn't realised that snails were a god-created vehicle for garlic.

If you do have a truly original idea, it is almost impossible to prove that it is yours. Nigel Mackenzie, former proprietor of the Hungry Monk restaurant in Sussex, has always insisted that banoffee pie was invented by his chef. The restaurant is now closed, and the chef has moved on, but Mackenzie is still offering a £10,000 reward to anyone who can prove him wrong. He has not earned a penny from the worldwide proliferation of banoffee.

My mum, the cookery writer Josceline Dimbleby, is convinced that her 1970s recipe for orange and cardamom ice-cream was the first recipe to pair this now-classic flavour combination in a pudding. (If you know otherwise, let me know. I'll pass it on.)

Generally, it is polite to at least credit your inspiration for a recipe. But that is not possible with today's classic cocktail. It is a twist on the mojito that has been floating around for a decade or so, and is perfect at this time of year when our raspberries are at their plumpest. But no-one seems to know whose idea it was. Whoever you are, we salute you.

Make your own raspeberry mint mojito

1 In a jug, combine the raspberries, mint, sugar, the juice of ½ a lime.

2 Cut the other half into small pieces and add to the jug. Mash the ingredients together.