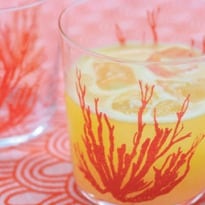 For instant sunshine in a glass, blend coconut water with fresh pineapple flesh.

The coconut used to have a doubtful reputation in this country. In films it was always an agent of ridicule, either boffing the unsuspecting on the head from a height, or strung comically over dancing breasts.

And from a culinary perspective - well, there was that sponge thing with jam and desiccated coconut on top that you got at school. And the Bounty bar: a uniquely divisive chocolate vehicle. Oh, and you might - once - have attempted to eat a real coconut, hard-won from the fair. You would set to it with a hammer and a rusty nail, before smashing it with a rock, before hurling it against the wall, before giving up.

But the coconut today is so fashionable it's a wonder it doesn't have its own TV show. How did this happen? First, the quality of coconut milk available to buy in the UK improved so that we could make Thai curries with something approximating the original silky liquid, rather than a gritty, watered-down cream. Then nutritionists decided that, although coconuts contain saturated fats, they are actually rather good for your cholesterol levels.

Most recently, coconut water has burst into our collective consciousness. It's the light-coloured stuff in the middle of the shell, not to be confused with the milk, which is made from ground flesh.

The water - replete with potassium and antioxidants - has become the latest health craze. A quick skim of the internet suggests it will cure anything from acne to herpes and reduce your blood pressure as it does so. Madonna loves it so much she invested in a coconut company and then hired Rihanna to promote her brand.

It probably isn't the solution to global wellbeing, but it is refreshing and delicious and now available at most supermarkets. Mixed with pineapple, as in this recipe, it is also pleasingly retro.

1 Mix all the ingredients together in a blender until smooth.

2 Place a few ice cubes in four glasses and pour the coconut drink on top. Each glass can be finished with a slice of fresh pineapple on the rim, or a lime wedge. To turn this into an alcoholic drink, add a splash of good-quality white rum.