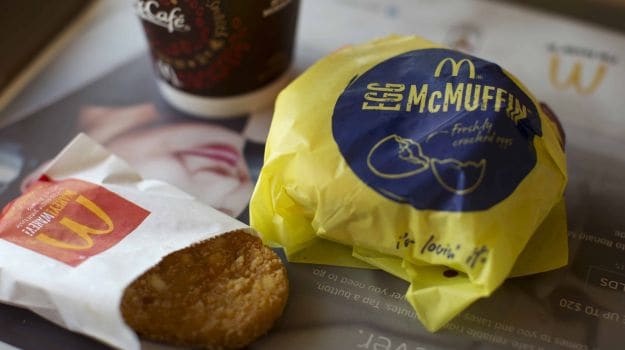 An Egg McMuffin meal is pictured at a McDonald's restaurant in Encinitas, California. REUTERS/Mike Blake/Files

McDonald's Corp reported better-than-expected quarterly same-restaurant sales as the launch of all-day breakfasts proved to be a hit with diners in the United States and demand continued to recover in China.

The world's biggest restaurant chain's shares rose 3 percent to a record-high of $121.90 on Monday. McDonald's introduced all-day breakfasts in October in the United States, allowing customers to tuck into its popular Egg McMuffins and Hash Browns any time of the day.

The move was aimed at countering increasing competition from chains such as Wendy's Co, Starbucks Corp and Burger King, which have been doubling down on their breakfast offerings. "All-day breakfast positions us to regain market share we had given up in recent years," new Chief Executive Steve Easterbrook said on a post-earnings conference call.

Up to the third quarter of 2015, McDonald's U.S. sales had fallen for two years after a series of missteps under former CEO Don Thompson, who left the company last February. All-day breakfast was just one of the measures Easterbrook implemented in a turnaround plan last year that involved making the menu simpler, improving service times and raising worker wages.

"I am particularly impressed with how quickly things are changing," Morningstar analyst R.J. Hottovy said. "Once upon a time, under previous leadership, it seemed like McDonald's became a less nimble company where it took a really long time to roll out new products and innovations."

Easterbrook, however, was cautious. "It will take at least six more months of positive comparable sales and guest count growth to progress through the sustained and prolonged growth phases of our turnaround."

He also said the company had limited pricing power in several markets as a "relatively benign commodity outlook" and low inflation would make it unable to raise prices.

CHINA BACK ON TRACK

McDonald's said same-store sales in China rose 4 percent, its second straight quarter of growth after a food safety scandal in July 2014 hammered sales for at least a year.

The company's recovery in China comes at a time when the world's second-biggest economy is slowing down, roiling global markets in the past few months. "The lower and middle income consumer (in China) is generally holding up okay. You've seen wage rate growth in that region, so I am not terribly surprised to see comps positive in China," Hottovy said.

The company also said it was exploring a sale of a portion of its Japan business, confirming earlier reports on the move.