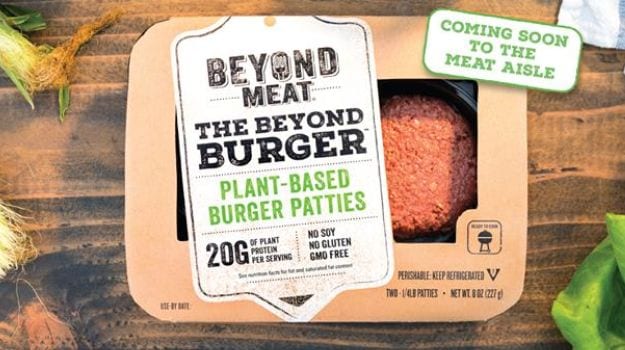 In Seth Goldman's vision of the supermarket meat case of the future, he doesn't see a meat case at all. He sees a protein case. And only some of the proteins in it will come from animals. "I want to see chicken protein, plant protein, beef protein," he says. "Just like what has happened in the dairy case."

Goldman, who co-founded Honest Tea, last year became executive chairman of the board of Beyond Meat, the California company whose high-tech approach to plant-based meat substitutes has attracted such investors as Biz Stone and Bill Gates. And his meat-case vision will get another trial on Wednesday, when the company's latest product - a strikingly beeflike veggie patty called the Beyond Burger - debuts at the new Pentagon City (Va.) Whole Foods Market, the only store on the East Coast to carry it. The burger will not be limited to the meat-substitutes section of the market but will be the first plant-based patty to be sold right alongside the fresh conventional burgers, Goldman says.

"I love vegetarians - my whole family has been vegetarian for 10 years - but if we're only selling to vegetarians, we're not really changing anything," says Goldman. He, Beyond Meat founder Ethan Brown and other company executives are making the case that eating less meat can improve human health as well as environmental and animal welfare.

Pentagon City will be just the second place in the country where the burger is sold, although Beyond Meat is planning an eventual national rollout. When the burger debuted at a Whole Foods in Boulder, Colo., a few weeks ago, the company figured it would sell about three cases (or 192 burgers) a week. Instead, the store sold 33 cases (2,112 burgers) in just two days. No doubt that's due partly to the Boulder market's commitment to showcasing the product, with a special burger bar pop-up dedicated to cooking and selling burgers made with the Beyond Burger patties.

But it's also, no doubt, a testament to the burger's surprisingly beefy texture and taste. Goldman and his team cooked up some samples for me to try - and then sent me more samples for me to cook on my own - and both times the results lived up to the hype. While the burger didn't exactly "bleed" vegetable juices, as some media reports have promised, it is juicy and rosy-colored from beet and annatto extracts. And it behaves much like ground meat when you cook and eat it. I cooked the patties in a pan without a drop of oil, and they oozed fat (the burger contains canola, coconut and sunflower oils) just the way ground beef does, leading to that familiar sizzle.

The patties smell a little like bologna when they're cooking, but once they're browned for a few minutes on each side, that aroma fades. The crust that forms is thinner than that of a "real" burger, but inside, the "flesh" tightens up just like beef, giving the burger a pleasantly chewy texture.

Tasters at The Post were unequivocal: "They taste the closest to meat that I've found in any veggie burger," said one.

Nutrition-wise, the burger stacks up closely to an 80 percent lean beef burger, using the USDA Nutrition Database: 290 calories for Beyond Burger vs. 288 for beef; 22 grams total fat vs. 22.7; 5 grams saturated fat vs. 8.7; and 20 grams protein vs. 19.5. The biggest difference: no cholesterol, compared to the beef burger's 81 milligrams.

As for price, Beyond Burgers cost $5.99 for two four-ounce patties, putting the product at $11.98 a pound, significantly costlier than even organic grass-fed beef, which at Whole Foods retails for $6.99 a pound.

What about the ingredients? The burgers are made from pea protein isolate, plus 20 other ingredients that Goldman said all meet Whole Foods' standards. But for eaters who abide by the Michael Pollan advice to never eat anything that includes ingredients your grandmother wouldn't recognize, the burgers might be a tough sell, unless your grandmother cooked with succinic acid and cellulose from bamboo.

When asked about the fact that the veggie burger is more processed than a beef burger, Goldman defended Beyond Meat's processing as less damaging than that of a cow building muscle for beef.

"One process takes plants, extracts the protein out of the plants, compresses it using heat pressure, and then puts that together with other ingredients found in nature and creates this," he said. "A cow takes plants, puts them into one acidic tank, processes it, puts it into another acidic tank and processes it, with tons of waste created along the way, not to mention greenhouse gases. It's a much longer time frame. It takes much more water and much more land, and it's still a process."