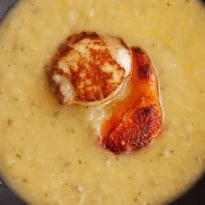 The Christmas meal is a much-loved tradition, but add a personal touch with a tantalizing starter.

The main course, that vast golden bird and its myriad trimmings, was decided upon weeks ago, and any change to the fruit-laden pudding to follow is unthinkable. But the dish that starts the Christmas feast is, at least in this house, up for grabs.

My knee-jerk Christmas first course is invariably piscine, often thin slices from a salmon that has been smoked or buried in salt - the gravlax, or gravadlax: literally buried salmon - that is given an edge with mustard and lemon sauce or shredded beetroot. Other successful starters have included a chicory, walnut and blue cheese salad and a diminutive onion tart. But I fancy a change.

This year's array of new cookbooks offers much temptation... The clean rawness of the tartare of grey mullet from Caroline Conran's heartfelt book Sud de France(Prospect Books, £20) appeals, especially with its hint of cucumber and raw fennel. Then again, there are the twin delights of Joanna Weinberg's beetroot and pumpkin houmous (Cooking for Real Life, Bloomsbury, £25) which would look festive in their shades of saffron and burgundy and have the advantage of being pre-prepared. But I will make them to eat with slices of cold roast goose on Boxing Day instead.

Other recipes beckon, too: Nigella Lawson's Sicilian cauliflower salad from Nigellissima (Ebury, £26), with its crunch of pine kernels and sweet golden sultanas, or Elisabeth Luard's intriguing salsify soup with cream and allspice from A Cook's Year in a Welsh Farmhouse (Bloomsbury, £25). All will pop up on my table this yule, but what is crucial is that the first bite of Christmas lunch is not too rich; it must not fill us. The first course should tease and tantalise, not satiate and satisfy. It should leave us wanting more.

There will be many occasions over the next couple of weeks to try out new dishes, to work on something new, to make the most of others' inventiveness - but in this kitchen the feast will start with a round of crisp rye toast decked with raw venison (beef is another possibility) with a festive seasoning of mustard, piquant capers and sweet dried cranberries. For those who are not fond of rare meat, there will be a pair of fresh scallops, a tiny seafood island in a rockpool of artichoke and parsley-flecked soup. Tiny edible jewels to ease us toward the principal dish. Yes, the feast has begun.

Artichoke and parsley soup with scallops

So naturally velvety and smooth is a well-blended artichoke soup that cream seems superfluous. Add a little if you wish, at the end, just after you have puréed the soup. Serves 6.

For the scallops:
butter a little
scallops 12

Halve the leeks lengthways, discarding the tough dark-green parts to the stock pot, then slice finely, put them in a colander and rinse thoroughly under cold running water. Grit often gets trapped in their layers.

Melt the butter in a heavy-based saucepan, then add the sliced leeks and let them cook, slowly and over a low heat, for about 10 minutes until soft and bright. They shouldn't brown. (A layer of greaseproof paper tucked on top of the leeks and a lid on the pan help them to soften without colouring.)

Rinse the artichokes, chop roughly, then add them to the leeks together with the bay leaves, a little salt and the stock. Bring the liquid to the boil, then lower the heat so the soup simmers gently, letting it cook, with the occasional stir, for 25 minutes until the artichokes are soft enough to crush.

Ladle some of the soup into a blender or food processor, taking care not to overfill it, then blitz until smooth, adding handfuls of the parsley leaves as you go. Continue until the soup is smooth, return it to the pan, then correct the seasoning with a squeeze or two of lemon juice and a little black pepper.

Cook the scallops by melting a small amount of butter in a nonstick frying pan, adding them when the butter sizzles, and frying them for a minute or two on each side until they have coloured very slightly. Ladle the soup into shallow bowls, add a couple of scallops to each one and serve.

Venison tartare with cranberries and chestnuts

Roughly chop the dried cranberries, then soak in the brandy for 20 minutes or longer, until they plump a little. Roughly chop the chestnuts, then toast them in a hot, shallow pan over a moderate flame for five minutes or so, until lightly browned. Set aside.

Put the capers, parsley, Worcestershire sauce, mustard and cranberries in a mixing bowl, then mix in the toasted chestnuts and the soaking liquor from the cranberries.

Trim any sinew or fine skin from the meat - even the smallest amount will spoil the finished tartare. Cut into small pieces and chop very finely into the smallest possible cubes, only a step away from coarse mince. (You can do this in a food processor, but it is difficult to gauge the exact texture.)

Add the chopped venison to the seasonings in the bowl, including a little crumbled sea salt and some black pepper, and toss them gently together. Cut the bread into roughly 3cm squares, trickle over a little olive oil, then toast until lightly crisp on both sides.

Pile the venison on the toast and serve.

Email Nigel at nigel.slater@observer.co.uk or visit guardian.co.uk/profile/nigelslater for all his recipes in one place