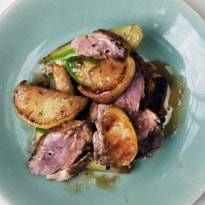 A quick and sumptuous duck dish

Vacuum-packed duck breasts sold in supermarkets and butchers' are useful for a quick dinner.

Season a couple of duck breasts with salt and black pepper. Warm a shallow pan over a moderate heat, then place the duck breasts, skin down, in the pan and let them cook for five minutes, until the skin is golden and lightly crisp, then turn and cook the other side for five minutes or so. Remove from the pan and leave to rest for 10 minutes. Leave the fat from the duck in the pan.

Peel two small cucumbers, or half a medium-sized one, then cut into thick slices. Halve, core and segment a couple of apples. Add the apples and cucumber, together with a little oil or butter if there is not enough duck fat in the pan, and leave them to cook for about five minutes.

When the apple is lightly golden and tender add three tablespoons of white vermouth, such as Noilly Prat, and let it bubble briefly. Stir in one tablespoon of honey (or two if you wish). Season carefully with salt and black pepper, then serve with the apples and cucumber. Serves 2.

If you leave the duck in place to brown nicely, without moving it too much, a rich dark film of caramelised meat juices and sugars will appear in the pan. When you pour in the liquid and the cucumber and apples, the film will dissolve and flavour the pan juices splendidly. If the apples are of the sweet dessert variety rather than "cookers", such as Bramley, they won't break up as they cook.

Crisp and golden: duck with apple. Photograph: Jonathan Lovekin for the Observer