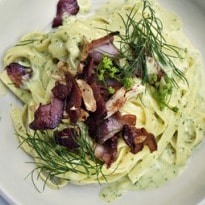 Into a blender or food processor, put 25g of fresh dill and 125g of grated parmesan. Blitz to coarse crumbs, then tip into a saucepan. Pour in 250g of double cream and bring gently to the boil, stirring until the parmesan has melted. Just as the cream starts to boil, remove from the heat, cover with a lid and leave for 10 minutes for the dill and cheese to flavour the cream.

Dice 180g of streaky bacon then cook until crisp in a nonstick pan. As the bacon is approaching crispness add two large finely sliced cloves of garlic. Continue cooking until the garlic is nicely toasted.

In a pan of deep water, cook 250g of fettuccine until tender, then drain. Bring the cream almost to the boil, then toss with the bacon and the dill and parmesan cream. I like to reserve a few bits of crisp bacon for the top. Serves 2.

The trick
Leaving the herbs and cheese to infuse in the cream works brilliantly. It is worth using for any impromptu pasta sauce. I do it with thyme, garlic, goat's cheese and cream. It will also work if you want to infuse the cream with prawn shells and basil for a seafood pasta sauce. That's a great combination, too.The twist
You could use most of the ribbon or shell pasta shapes for this. If you wish to leave out the bacon, you might like to try chestnut mushrooms, thinly sliced and fried until deep golden brown instead.

Pasta with a herb twist: dill and bacon. Photograph: Jonathan Lovekin for the Observer