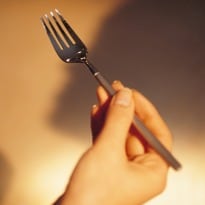 What if the fork could add extra flavour to the food you eat it with? Canadian researchers have invented forks that emit smells to make people think they are tasting flavours like ginger, coffee or banana as they eat their meal.

Known as Aromafork, these gadgets has a capsule filled with 'liquid aroma' underneath the handle. It is soaked through a small blotting paper and released gradually as you eat your meal. The fork emits smells which waft over the food and reportedly add to the flavour.

"The initial idea was to reinvent the traditional fork into an improved utensil that would trick people's mind by liberating an intense flow of aromas," Jonathan Coutu, president of the Canadian inventors' firm MOLECULE-R Flavors, was quoted as saying.

Promoted
Listen to the latest songs, only on JioSaavn.com
The metal Aromafork comes with 21 different flavours, including chocolate, vanilla, lychee, strawberry, basil, mint and almond. The user has to apply the 'taste' each time using a dropper and put a piece of blotting paper in place, media reports said.