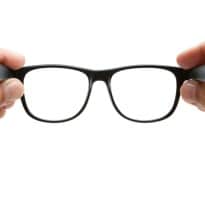 A pair of goggles created by Japanese scientists is the latest advance in the battle of the bulge.

The goggles fool a person's brain into believing their stomach is full by making food appear to be larger than actual size.

Developed by the researchers at the University of Tokyo's Graduate School of Information Science and Technology, the goggles are equipped with video cameras linked to a computer that is able to manipulate the images.

The computer is able to make the food appear as much as 50 percent larger or 33 percent smaller than its actual size.

To make the illusion even more convincing, the processor is able to make the person's hand appear to be the same size as normal, the Telegraph reported.

"By changing the size of the food and scaling it up we have shown that participants eat about 10 percent less over the course of a day," Takuji Narumi, an assistant professor working on the project, told a news agency.

"This is because the brain believes visual information rather than the information that it receives from the stomach or our other internal sensors," he claimed.

In tests, subjects taking part in a single sitting were asked to eat biscuits until they felt full. The test subjects using the augmented reality device that made the cookies appear 50 percent larger ate 9.3 percent fewer biscuits than when they only used their naked eyes.

When the system made the biscuits appear to be 33 percent smaller, however, the test subjects consumed an average of 15 percent more.The five-strong team of scientists has been working on the project for six months but do not have plans to turn it into a commercial product in the near future.