NYC Holiday: Why You Must Take A Food Tour In New York City 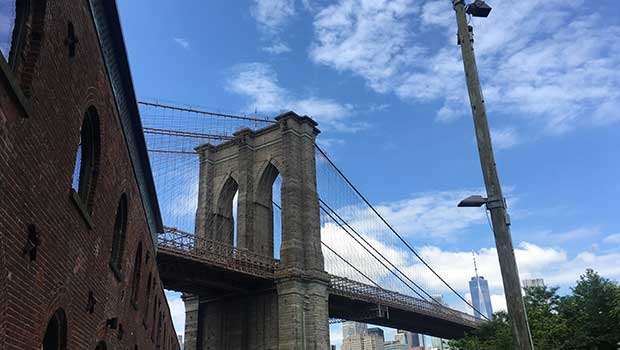 What's the best way to spend a day in New York City? Walk around Central Park, see the Statue of Liberty or enjoy the gorgeous view from atop the Empire State Building, some would say. And, those are perfectly fine things to do too. But, when you have more than a few days in the city, wouldn't you want to do more? Something a little more immersive, something that gives you a taste of the less-touristy things, perhaps? And, that's precisely where food tours come into the picture. They not only give you a peek into new flavours, but these tours are a great way to soak in local sights and sounds. They literally are, to my mind, the best ways to explore a new city and indulge in its uniqueness. Now, what if there was a tour in that, combined a little bit of history along with local flavours? Earlier this year in New York City, I decided to go on the Slice of Brooklyn, Pizza Tour. It's one of the most popular tours in NYC, and honestly, what better way to explore lesser known parts of New York than with a slice of pizza in hand?

A Slice Of Brooklyn In NYC: Thumbs Up To This Pizza Tour

The tour starts and ends at Union Square Park. It takes you on a fun trip to Brooklyn, a NYC borough that's rapidly growing as a popular tourist stopover. Settled by the Dutch in the early 1600s, Brooklyn was earlier called Breuckelen. Today, the city has history and culture oozing out of its beautiful architecture. The tour does a great job of bringing these facets alive for tourists. Whether or not, you are a fan of John Travolta's work or loved Saturday Night Live as a kid, driving past the exact pavement where the opening sequence of the movie was shot as the same scene is played out on the bus's multimedia system is really fun - this tour does a great job of providing a real 'slice of life' experience.

Our tour was conducted by a well-informed and even more funny tour guide called Marc Sauve. Mr. Sauve is of those guides who know everything there, he is a local after all, but he also excels in showcasing this info in a friendly way. Through the tour, he kept sharing tidbits about the places we were crossing or going to next, making sure that everyone is engaged and interested at all times.

Highlights Of The Tour: The Two Pizza Joints We Visited

Our first pizza pit stop was at Grimaldi's, an iconic pizza joint famous for their Coal Brick Oven Pizzas. Grimaldi's, right under the Manhattan Bridge, has the look and feel of a traditional pizzeria with lovely aromas wafting through the eatery. The building once used to house a bank and that's why, it has the look of a fortified building from the outside. They still make their pizzas using a coal fire oven, giving all the pizzas a nice charred flavour. The pizzas are cooked in 3-4 minutes in high heat and come out super-hot with all ingredients looking fresh and appetising. We tried the classic Neapolitan Margherita, which was as flavourful as they come. The crust was nice and crunchy and the cheese delightfully fresh. The pizza sizes are huge and a couple of slices are more than you can have. Being a favourite with locals and tourists, Grimaldi's always has long ques waiting outside for tables. Fortunately, if you are with a tour group, you get a table right away.

The pizzeria is right on the Dumbo Waterfront, so after your meal, take a nice stroll around the famous 100-year-old carousel, sit by the water and enjoy the beautiful scenery.

(Also Read: Know These Exotic Varieties Of Pizza And Order Like A Pro)

Our second pizza stop was at another eatery that has had patrons coming back to it for decades and more. If Grimaldi's is popular for its Neapolitan-style pizzas, L&B's signature pizzas are Sicilian in origin. These two are vastly different pizzas and to taste them both, one after the other, is quite something in itself. You end up appreciating the differences better, and perhaps are even able to pick favourites.

If you like your pizza a bit more on the saucier side, then L&B Spumoni's Sicilian pizza squares will be a happy treat.

(Also Read: Xero Degrees In CP Serves Pizza In A Jar That Is Too Cute To Miss)

According to Marc, there are three things that can totally ruin a good Sicilian pizza:

In my opinion, the third factor is most crucial. Remember, in a Sicilian pizza, the cheese is put under the sauce. Yes, under it. If the cheese is chewy and not fresh, then the pizza will taste really bad, with the cheese sliding off from under the sauce. The sauce here though, is the real star. It's cooked for hours till its thick and gets a distinct sweetness to it.

There's no better way to experience local culture than by tasting local flavours at places that are run and frequented by locals themselves. The Slice of Brooklyn Pizza Tour allows you to do just that - take in the sights and sounds of Brooklyn while enjoying its authentic flavours. It's why I'd give it a thumbs up all the way from New Delhi to New York.