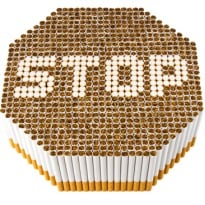 For all of you looking to cut out on that bad habit, here's a new, inexpensive and healthy solution.

Omega-3 doesn't just help with healthier brain function and type II diabetes, it also helps kick nicotine cravings that bug you through the day. According to a one-of-a-kind study that was published in the Journal of Psychopharmacology, omega-3 supplements can also reduce the number of cigarettes that you smoke in a day.

Dr. Sharon Rabinovitz Shenkar, head of the addictions programme at the University of Haifa's school of criminology department said, "The findings of this study indicated that omega-3, an inexpensive and easily available dietary supplement with almost no side effects, reduces smoking significantly." Cigarette smoking is connected not only to cardiovascular dysfunction, immune system dysfunction and cancer, it also reduces the levels of essential fatty acids in the brain, especially that of omega-3.

The current study included 48 smokers aged 18 to 45 who smoked at least ten cigarettes a day during the previous year, and an average of fourteen cigarettes a day. They were diagnosed as having a moderate dependency on nicotine. In total, the average age of the participants was 29 and the average age they began smoking was under 18 which means that they had been smoking for an average of eleven years. The participants were divided into two groups: One group received omega-3 capsules while the second group received a placebo.The participants were asked to take five capsules a day for thirty days and in total reported taking more than ninety-four percent of the capsules. At no stage in the study were the participants asked to stop smoking. The levels of nicotine craving and consumption were checked using a series of scales regarding various aspects related to smoking urges, such as lack of control over tobacco use, anticipation of relief and satisfaction from smoking, and to the number of cigarettes smoked each day.

These levels were measured at the beginning of the study, after thirty days (of treatment) and after sixty days which was thirty days after the subjects stopped taking the capsules. Each time the study participants were tested they abstained from smoking for two hours and were then exposed to smoking-related cues images in order to stimulate their craving for nicotine.

The findings showed that while no difference was found between the groups at the beginning of the study, after thirty days the smokers who had taken omega-3 reduced their cigarettes by an average of two a day (an eleven-per cent decrease), even though they were not asked to change their smoking habits in any way.

After another thirty days of not taking anything, cigarette cravings increased slightly but still remained significantly lower than their initial level. The craving to smoke cigarettes did not return to the baseline level even a month after stopping to take the supplement. The group receiving the placebo did not show any significant changes in their craving levels or in the number of cigarettes they smoked a day during the sixty days.