She rang in her new year at a beautiful bistro in Budapest and tried her hands at some delectable desserts. The Vintage Garden restaurant, which she described as the 'cutest restaurant in the world', is sure to light up your Instagram feed. 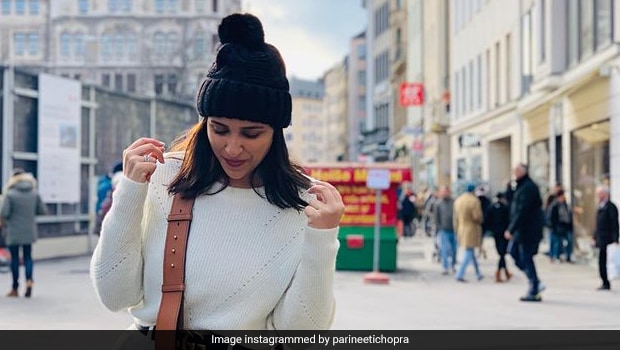 Parineeti Chopra is holidaying across Europe

Parineeti Chopra had quite an eventful 2019. She replaced Shraddha Kapoor as the lead in Saina Nehwal's biopic. The official Hindi remake of 'The Girl On Train', which stars Chopra in lead, is on floors too and is all set to release this year. Parineeti Chopra also dubbed for Anna's character in the Hindi adaptation of 'Frozen 2'. This was her first collaboration with sister Priyanka Chopra. After a packed year, Parineeti is enjoying her much-needed break in picturesque locales of Europe, and it seems like she is a mood to indulge. Around Christmas, she posted a picture of her enjoying a warm cup of hot chocolate. She rang in her new year at a beautiful bistro in Budapest and tried her hands at some delectable desserts. The Vintage Garden restaurant, which she described as the 'cutest restaurant in the world', is sure to light up your Instagram feed. Dressed in hues of pink, peach, pastels and whites, the quaint setting of the restaurant is truly a delightful step back in time.

Parineeti in one of her latest Instagram stories not only gave us a glimpse of the restaurant where we saw lots of heavily-decked up Christmas trees, macaroons, and old-world candle-stands, she also gave us a sneak-peak into her desserts. The drool-worthy spread included a fudgy, moist chocolate pastry, topped with hot chocolate sauce and sprinkles. We also spotted a portion of creamy cheesecake and two cute pig pop cakes. Pig is considered to be a symbol of good luck in many countries, which is why it is consumed on New Year's.

(Also Read: Parineeti Chopra Had This Low-Carb Snack During Her Latest Photoshoot)

While we wonder how many of these Parineeti Chopra actually tucked into, she surely gave us some serious Instagram goals.  See pictures below.

3 Quick And Easy Ways To Use The Leftover Chicken At Home
PM Modi Tries Litti Chokha At India Gate: 6 Things You Should Know About The Bihari Delicacy