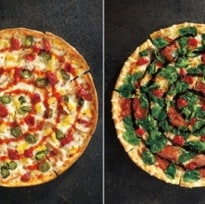 Pizza Hut is hoping Sriracha, toasted asiago and a jeans-and-T-shirt makeover will spice up its soggy sales.

Starting November 19 the troubled chain will greet diners in the US with a new menu, new boxes and new employee uniforms as it struggles to turn around its business following two years of declining sales.

The move comes as the pizza chain, the largest in the US, is getting an increasingly smaller slice of the pie. Its percentage of the pizza market has slipped from 19% in 2008 to 16.7% in 2013, according to restaurant analyst Technomics.

"We're embarking on the biggest change that we've ever made as a brand," said Carrie Walsh, Pizza Hut's chief marketing officer. On a call with investors on Monday, David Novak, CEO of Yum! Brands, which owns Pizza Hut, KFC and Taco Bell, said the makeover would help the chain "better connect with millennials" and "reinforce Pizza Hut's leadership, quality, innovation and superior value".

Technomics analyst Darren Tristano praised the chain for going "all in" but said it had little choice. He said Pizza Hut had found itself in a no-man's land between high-quality pizza restaurants and cut-price competitors.

Backed by its largest ever advertising campaign - dubbed "The Flavor of Now" - Pizza Hut will more than double the available ingredients at all 6,300 US locations.

Among the new options on offer the chain will launch:

"Today's diner is far less loyal than in the past and far more receptive to innovation, so Pizza Hut's brand refresh could lure back lapsed customers or give non-users a reason to place their first order," Tristano said in a blogpost. "But there is reason to question whether rolling out this many changes simultaneously is the most prudent move for a major chain."

He said the operational complexity of making such a big shift could lead to short-term declines in consumer satisfaction and that the new image might confuse older, more traditional customers.

The decline of Pizza Hut, established in 1958, comes as a number of established chains have struggled to keep up with changing consumer behaviour. Chains including Arby's, Olive Garden and Quizno's have all reported difficulties as newer brands like Chipotle and Panera Bread have stolen market share.

Harry Balzer, vice-president of NPD Group and author of the Annual Report on Eating Patterns in America, said there was no problem with pizza as a category. "It's one of the top 10 foods," he said. "But what people are looking for is something new. We are always looking for new things, especially old things we are familiar with presented in new ways."