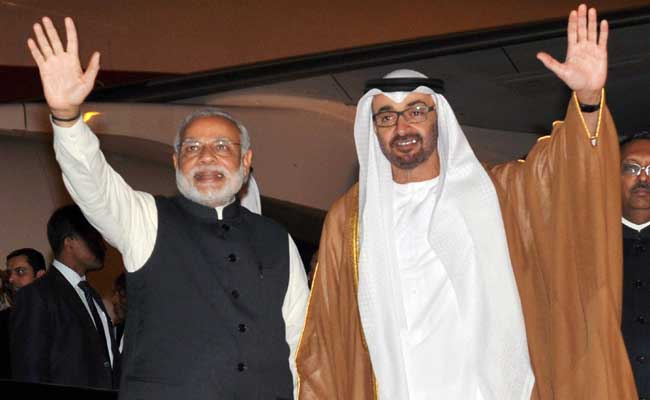 Food security was another area which was discussed at length at the delegation level talks between PM Modi and Al Nahyan. UAE is keen to increase its import of food from India. In the talks, the UAE also mentioned about the contribution of the 2.6 million Indian diaspora in overall development of the country.

During PM Modi's visit to UAE, it was decided to increase the current volume of bilateral trade by 60 per cent in the next five years and the issue figured in the talks yesterday. The annual bilateral trade currently is around USD 60 billion. India is UAE's number one trading partner while the Gulf nation is India's third largest trading partner after the US and China. UAE is India's second largest export destination.

For India's energy security, UAE is an important country as it gets 9.38 per cent of total crude requirement from that country. The volume of supply in 2014-15 was 15.99 million tonnes. The economy of UAE, one of the leading producers of oil, has been hit hard by falling crude prices and it is expected that the Gulf nation would like to invest significantly in India's energy and infrastructure sectors.The two countries had already agreed to make bilateral investments in the petroleum sector and also take up joint projects in third country. UAE has initiated a Mars mission for 2020 and India has
agreed to assist that country in the project. Earlier, Al Nahyan was accorded a guard of honour at the
Rashtrapati Bhavan. He also visited Rajghat and paid homage to Mahatma Gandhi.

Nahyan arrived last evening on a three-day visit to a warm welcome as the Prime Minister, breaking from protocol, received him at the airport.