Protein From 'Thin Air'? The Greenest Source Of Dietary Protein Has Arrived

A Finnish company has reportedly fashioned a protein from thin air. Inspired by a concept developed by NASA, the company is reportedly planning on launching a type of protein made by using carbon dioxide, water and electricity. 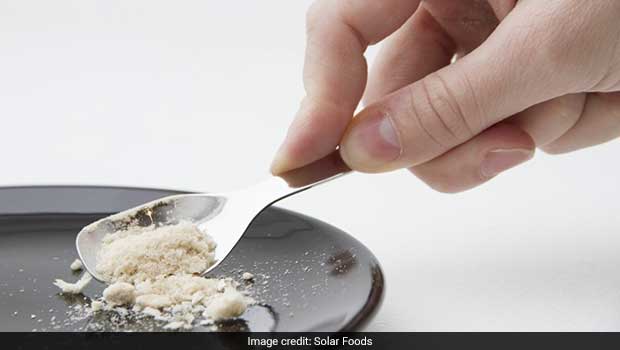 Solein is a protein powder made from water, electricity and carbon dioxide

Lately, there has been a lot of talk about the need for reducing dietary carbon footprint of humans around the world, with climate change becoming a key global issue. Numerous environmental experts and activists have made a case for switching to a vegan or vegetarian diet, as these are less resource-intensive and generate less amounts of harmful gases as compared to raising livestock and storing and transporting meats. This may be one of the reasons behind the shift from meat-intensive diets to vegetarian or pant-based diets and the rise of animal-based meat substitutes. Now, a Finnish company has reportedly fashioned a protein from thin air. Inspired by a concept developed by NASA, the company called Solar Foods is reportedly planning on launching a type of protein made by using carbon dioxide, water and electricity.

The protein powder that the company is currently testing is called Solein and it is said to be 'carbon-neutral'. It is also reportedly similar in form and taste to wheat flour. "An innovation created by leading cleantech expertise of Finland and based on a concept by NASA, the unique and pure single-cell proteins of Solein are produced from CO2, water, and electricity", says the company website about their product. The company plans on making the product available in supermarkets in the next two years and it is also working with the European Space Agency to supply astronauts on a mission to Mars. The product is said to be conducive for 3D printing of food and may be used as an ingredient for dishes as well.

(Also Read: 10 Food Habits You Can Change to Save the Earth)

"Food out of thin air: an ingredient in yogurt or meat alternatives like plant-burgers." The @Telegraph writes about Solar Foods. Read more: https://t.co/qNpXA8Sdj8#foodoutofthinair#solarfoods

So, how exactly is this protein prepared? According to a report in The Guardian, the process of making Solein is similar to brewing beer. The process involves passing carbon dioxide and hydrogen bubbles through a liquid that contains live microbes. The CO2 and hydrogen are released by passing electricity through water. The microbes are said to make the protein, which then dried to make the powder. The USP of the product is that its production is not constrained by the availability of wide swathes of agriculturally fertile land, as is the case with crops, or with animal farms. Solein is being touted as the most environment-friendly protein to date, but the company is still testing out its practical applications.

The product comes against the backdrop of escalating impacts of climate change being witnessed around the world. Food security remains an issue in large parts of the world and land is a finite resource that is likely to be burdened more than ever in the future.