Protein-Rich Diet: Add Some Protein To Your Baingan Bharta With Soya Keema (Recipe Inside)

As per USDA data, 100 grams of raw soy beans contain 36 grams of protein. So, adding soy to the regular baingan bharta will not only make the dish tastier, but also rich in protein. 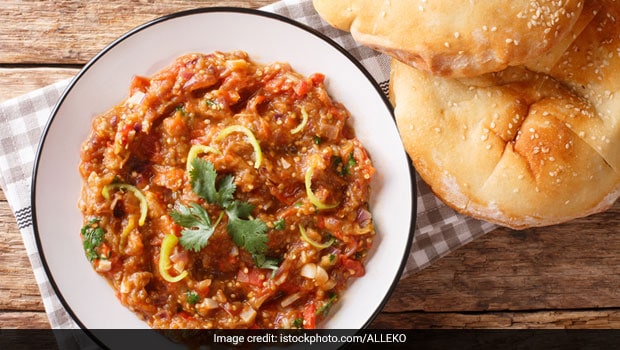 Baingan, also called aubergine and brinjal, is a welcome addition to the diet of most people, barring the ones who are allergic to this vegetable. From baingan fry to stuffed baingan- this vegetable is popular among people in every part of the country. One of the several popular baingan dishes is baingan bharta. Did the name of the dish make you slurp already? Now imagine, if we add some soya keema to this very spicy and tasty dish to make it protein-rich!

Soya is not only lip smacking, but is also considered as a healthy legume. As per USDA data, 100 grams of raw soy beans contain 36 grams of protein. This combined with the baingan already present in the dish, which contains a beneficial amount of antioxidants as well as potassium, folate, magnesium, beta-carotene and fiber. So, adding soy to the regular baingan bharta will not only make the dish tastier, but also richer in protein and thus more packed with nutrients.

Onion- one to two (finely sliced)

Sugar- as per taste

Slit baingan in two parts. Brush mustard oil on it and roast on oven.

Also brush some oil on tomatoes and roast alongside.

Once both the vegetables are well cooked, take them off flame, peel and mash separately in two bowls; keep them aside.

Take a sauce pan, add some water and salt, and give a boil.

Switch of the flame and add the soya chunks; after four to five minutes, when the soya chunks soften, strain the water and mash the chunks into keema.

Once the masalas release smell, add the onions and fry them till they are light brown in colour.

Add ginger garlic and green chilli and fry till the ginger and garlic gets well cooked.

Now add mashed tomato in it.

Add the soya keema and mash till it gets a thicker consistency.

When you are satisfied with the texture and colour, add the mashed baingan in it and cook till the baingan releases oil.

Finally, add some garam masala powder and coriander leaves and close the lid.

The non-vegetarians can also replace soya keema with chicken keema.

Street Food Of India: How To Make Delish Ragda Chaat At Home
Watch: You Must Try These 4 Bhindi-Based Recipes For An Appetising Meal