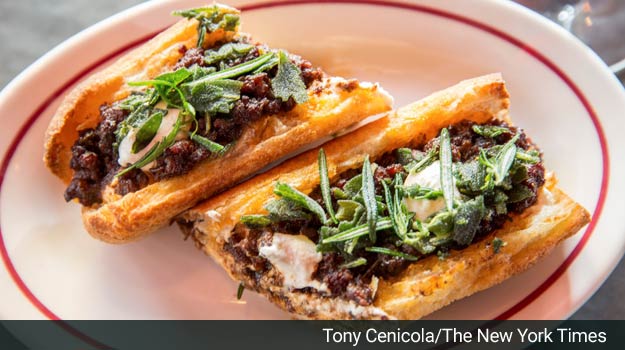 It is one of life’s nagging mysteries: Why is a sandwich you order at a restaurant so invariably and intensely better than a sandwich you make at home?

Is there some immense secret realm of sandwich-master knowledge that mere mortals have no access to? Why do you find yourself in the kitchen, pressed for time, bereft of inspiration, staring slack-jawed into the refrigerator and succumbing to yet another bland slapped-together calorie blast of cold turkey and mealy tomatoes on supermarket white?

With every bite, you taste only regret.

To remedy that, we fanned out across New York City, where plenty of chefs (and butchers and bakers) are applying their deep-tissue understanding of flavor, texture and technique to the task of converting every sandwich into a midday marvel. We pestered them for tips.

Fair warning: Making a better sandwich means avoiding the shortcuts. “People see a sandwich as so casual, so last minute,” said Gil Calderon, the chef and general manager of Meat Hook Sandwich and a man who gets swept up in very serious discussions of “textural play” and “temperature contrast.” “The best sandwiches are the ones that have a little more time devoted to them.”

Here’s what else the experts advised:

Turn up the heat and humidity - Hot and wet usually beats cold and dry: You know this in your bones, even if you don’t always practice it. So does Hillary Sterling, the chef at Vic’s, in NoHo. Her popular brisket sandwich triumphs, in part, because she takes the time to chop the brisket into squares, warm and tenderize it slowly in a pan of jus, then splash a few spoonfuls of that hot, flavor-dense braising liquid on top of the meat that she pyramids on the freshly toasted bread. “We serve it quick enough that the bread doesn’t disintegrate,” she said.Give it a schmear - Alchemy takes place when a well-toasted piece of bread meets a luxurious spreading of fat. “You can’t be scared of fat,” said Justin Smillie, the chef at Upland, on Park Avenue South, who relies on brushings of top-shelf olive oil or squirts of Kewpie mayonnaise from Japan (and sometimes both at the same time). Why is the challah on Mile End’s chicken-salad number so spot on? It’s toasted on the griddle with a scrim of schmaltz. Why is that Italian combo at Meat Hook Sandwich better than most? Ask Calderon. “So we make this whipped lardo,” he said the other day. That’s right: melted pork fat with salt and roasted garlic. “You want to lubricate it in some kind of way,” he said.

Keep it consistent. At Breads Bakery, near Union Square, Uri Scheft is obsessed with making sure the cream cheese is spread in a uniform layer over every millimeter of surface area on the smoked-salmon sandwich. “I don’t want dry spots,” he said.

Remember the crunch - At Upland, it’s a hand toss of deep-fried brussels sprouts petals. At Mile End, inside that chicken-salad sandwich on challah, the satisfying crunch comes from a pinch of gribenes, the fatty cracklings that are left after chicken skin has been melted down to make schmaltz. “People always forget about texture with sandwiches,” said Noah Bernamoff, an owner of Mile End, in Manhattan and Brooklyn. “You don’t want it to all be mush.” If you have no gribenes, crumble up a rasher of bacon or even some potato chips.

Move the pickles inside - Almost every compelling sandwich in New York (the Scuttlebutt at Saltie, the hot roast beef at Bar Primi, the Cheddar and Branston pickle at Tea & Sympathy, the Tunisian tuna with preserved lemon at Breads Bakery, most of the menu at Court Street Grocers) derives a flavor jolt from a vinegary component that home cooks often neglect. At Bar Primi, on Bowery, chef Sal Lamboglia doubles down, including both pickled Italian peppers and a wet dark-purple tangle of red onions simmered for hours with dried herbs in vincotto and balsamic vinegar. “That adds this extra bit of acidity,” Lamboglia said. You don’t have to go to such lengths, but even a chopped-up gherkin can work miracles.

Ladle on the leftovers - Got some chili? Last night’s goulash in Tupperware? “Turn your leftovers into a sandwich and think outside the box,” chef Marco Canora said. Consider the surprise  that he and his crew dish up each night at Fifty Paces. They call it the Sloppy Giuseppe, and it involves a pour of straight-out-of-the-pot pork ragù from Hearth, Canora’s flagship restaurant in the East Village. The ragù floods a stecca that has been heated in the oven, smeared with fresh ricotta and crowned with crisp fried herbs.

Salvage last night’s salad - The Scuttlebutt sandwich at Saltie, in Williamsburg, Brooklyn, delivers a complex array of flavors (salty, sweet, creamy, pickled), but its core principle is simple: Dump a bunch of salad between two slabs of focaccia. Curried onions, shredded and pickled carrots, beets, black Moroccan olives, capers, fresh herbs like parley and cilantro and mint - you can make this mix in advance and spoon it on bread with a chunk of feta and a blanket of aioli when you’re hungry. “Seriously, this would make any sandwich good,” said chef Caroline Fidanza, a founder of Saltie.

Make your peace with soft bread - It seems kind of chic to reach for a baguette. The problem is that unless you’re fixing the most basic of French repasts (nothing inside but butter and ham, for instance), the hard exterior crust of a baguette means that you risk the squish-and-splat factor, in which your toppings go sky diving out to the sides. “With baguettes, you’re always chasing the filling: 'Oh, now it’s on the other end!'” Fidanza said. The solution is simple: soft bread. At Tea & Sympathy in the West Village, Nicky Perry and her team rely on Orwashers, an Upper East Side bakery, for breads that echo those she remembers from her childhood in England. With curried chicken salad, or a graceful combination of egg salad and watercress, each bite remains in place. “We don’t fill ours so thick that you can’t get your mouth around it,” Perry said. “To me, that’s very unappetizing.”

Think fresh - It should come as no surprise that Scheft, the baker at Breads, believes you need to use fresh bread for a righteous sandwich. What’s instructive is that he (like Perry, who forbids putting tomatoes in the fridge, where they turn mushy and tasteless) insists just as wholeheartedly on the freshness of vegetables. At Breads, key ingredients - cucumbers, tomatoes, herbs - are chopped only before the next round of sandwiches is ready for assembly, circumventing the sitting-around sogginess that has undermined many a beach-basket effort. “The freshness is a big deal for us,” Scheft said.

Thinking that way can open up new avenues of possibility. You just passed a farmers’ market stall selling goat cheese, basil and spring asparagus? You may have all you need.

1. Heat oven to 350 degrees. Rub chicken on all sides with olive oil, season generously with salt and pepper and arrange on a rimmed baking sheet. Bake until skin is golden and meat is cooked through, about 45 minutes. Let chicken cool slightly, then remove skin and bones and chop meat into bite-size pieces. Set aside.

2. Meanwhile, melt the butter in a large saucepan over medium heat. Add the onion and sauté until translucent, 5 to 7 minutes. Add the red wine, mango chutney, tomato purée, curry powder, lemon juice and bay leaf and bring to a simmer. Continue simmering, stirring occasionally and adjusting heat as necessary, until sauce is quite thick, 8 to 10 minutes. Season to taste with salt and pepper; remove and discard bay leaf.

3. Transfer sauce to a large bowl and let cool to room temperature, then add the mayonnaise and stir to combine. Add the cooled chicken and the apricots and stir to coat them in the sauce. Season to taste with salt and pepper. For sandwiches, spread the chicken salad on thick slices of English white bread or seven-grain bread. Cut off crusts if making finger sandwiches for tea.