Safed jamun is better known by a plethora of English names including wax apple, love apple, java apple, Semarang rose-apple and wax jambu. Here's all you need to know about this fruit! 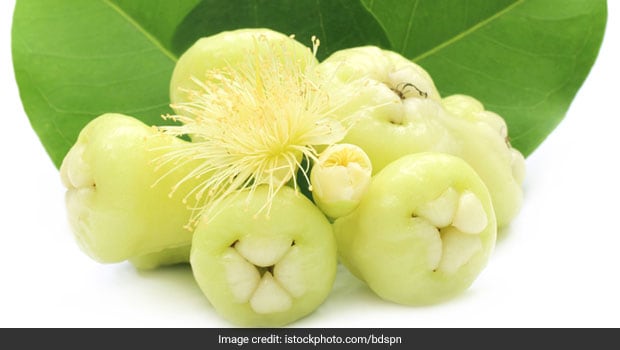 Come summers and Indian grocery stores and the local fruit-vendor stalls are filled with seasonal goodness from a variety of fruits and berries. There's the bright red of watermelons and cherries, the bright yellow of mangoes and sun melons, the greens from pears and grapes and the purplish black from jamuns. The tangy jamuns are perhaps the most celebrated desi summer fruits of all, second only after a whole range of mangoes that flood the markets. Jamuns are available for a very short period of time during the year and they're the best when consumed during peak summers. Also known as java plums, these purple fruits are turned into chutneys and dips, added to desserts and ice-creams and also added to drinks like lassis and other summer coolers. But have you heard of white jamun or safed jamun?

The elusive fruit is not very widely available in India and hence, isn't as much in the limelight as its purple cousin. Safed jamun is better known by a plethora of English names including wax apple, love apple, java apple, Semarang rose-apple and wax jambu. It is also known as bell fruit because of its bell-like shape, and water apple. The fruit comes from the plant Syzygium samarangense, which is native to only certain areas, including Andman and Nicobar islands. The fruit has a pinkish tinge on the outside with a waxy pulp on the inside and is known as rose apple, due to the subtle flavour of rose petals in its pulp. The fruit is said to be mostly used in preparing salads. The raw white jamuns may be used in making vinegar and wine due to its tangy and dry taste.

Also Read: Jamun Seeds For Diabetics: Here's How You Can Use Them In Your Diet

Safed jamun or wax apple is also known as Golap Jaam in Bangladesh and it is also popular at fruit markets in Kolkata, where it is more popularly known as Gulab Jamun, owing to the sweet smell of rose in the fruit. In the Philippines, it is known as Makopa. The consumption of wax apples is not very widespread, owing to the handful of regions that the cultivation is restricted to. Additionally, it is advised for one to practice caution while consuming it, as the seed is considered poisonous.

Here are some purported benefits of the rose apples (safed jamun):

1. Rich in Vitamin C: These fruits are said to be rich in Vitamin C, which is important for boosting immunity and formation of collagen for keeping the skin looking young. A 100 gram portion of wax apple contains 22.3 micrograms of Vitamin C (as per USDA data).

2. Rich in Dietary Fibre: White jamuns or rose apples are said to be rich in dietary fibre, which may help protect against common digestive troubles like diarrhoea and flatulence. Dietary fibre is also good for regulating blood sugar and helps in weight management.

3. Rich In Vitamin A: One of the most important nutrients for eye health is Vitamin A, which is found in abundance in the rose apples.

4. Rich in Calcium: The most important nutrients for teeth and bones is calcium, which rose apples are rich in. A 100 gram of rose apple contains 29 micrograms of calcium (as per USDA data).

5. Rich in Potassium: Rose apples contain good amounts of the nutrient potassium, which is important for maintaining fluid and electrolyte balance in the body.

Rose apples or safed jamun also has high water content (93 gm per 100 grams) and may hence help you stay hydrated in the scorching heat. Not enough information is available about the dietary benefits of rose apples, but the fruit is certainly said to be popular in certain isolated parts of the Indian subcontinent.