Samosa: The new star of a musical 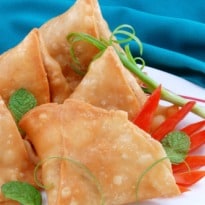 The humble samosa hot and spicy, is the star of a brand new musical, which pays homage to the snack considered a favourite among generations of students of the Mount St Mary's school here.

"The Samosa (W) Rap" is one among the 14 songs created specially for the musical "Fast Forward" to commemorate the upcoming 50th Jubilee year of the school.

"From the boardrooms of New York to everywhere they go, for the ex-students, the talk seemed to be about samosas. While usually everyone else talked about life in a nutshell
for them life seems to be in a samosa!" says Sharmila Banerjee Livingston, who has composed and directed the musical. Sharmila, a soloist and a Delhi-based musician whose
previous stint as Director of the city's well known choir 'The Capital City Minstrels' says she combined her love for music and food to create original lyrics and music that will find
the resonance with children and adults alike.

"I have done several musicals before but the 'Fast Forward' is a combination of 14 songs with different styles of music like country, broadway style, some rap, choir etc," says
Sharmila. The musician, specialises in contemporary and classical sacred music and has performed in concerts and conferences in India, and abroad.

"The music is very singable and has been a delight to create lyrically and melodically in a wide variety of musical styles," says the musician. The musical has been written with Indian school children, parents, teachers in mind - their experiences, their issues,
their challenges. Comprising a mishmash of dance, drama and soloists, the
musical has been produced by Daniel B George and features a
cast of total cast of 750.

"I got the assignment in March and actively began writing it in May and finished it by July. I started auditioning and rehearsals and now we are ready for the show on November 1,"
says Sharmila.The musician says she had conducted a short survey with students and teachers before settling down to pen the musical."Almost everyone had something to say about the samosa, that's how the samosa rap came about," says Sharmila.

Promoted
Listen to the latest songs, only on JioSaavn.com
The musical plays on the past, present and future, using fictional characters who have a collage of experiences and emotions that a student, teacher, staff member or parent can
relate to.

Sharmila says the musical has modules that can be personalised to be relevant to any institution. "It has been written with Indian school children, parents, teachers in mind - their experiences, their issues, their challenges. It is a musical that has been written from scratch
with an Indian audience in mind, addressing Indian issues.

Comments "Musicals are very easy to digest, it has got the story acting and very easy as an experience. It is one of the most popular version of musical theatre. More than the audience, it is a fun experience for the children. After this I'd like to transform one of the musical for staging by a semi-professional adult group," says the veteran musician.