Chocolate Samosa Inside Pav Is The Latest Viral Food Combo. Would You Try It?

The dish featured in the video had Pav buns stuffed with a chocolate-filled samosa and topped off with melted cheese and some more chocolate sauce. 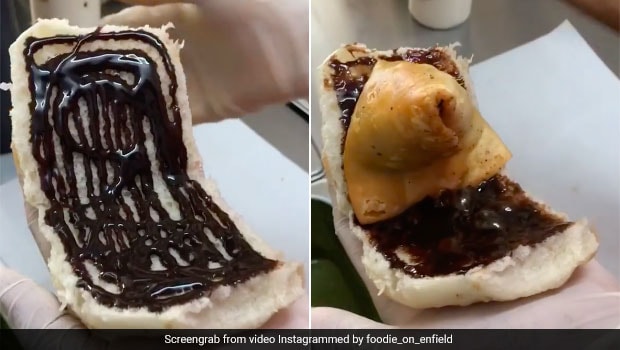 This fusion dish combines a Chocolate Samosa inside a pav.

Chocolate is one flavour that we just cannot get enough of. The humble ingredient instantly amps up any dessert preparation, making it doubly delicious than it was before. Chocolate comes in many shapes and forms, and a new chocolate dish is invented practically every day. However, there are certain dishes where even die-hard fans of chocolate would draw the line. A video that was recently shared on Instagram by a food blogger featured a unique fusion dish made with chocolate. Take a look:

The video was shared on Instagram reels by user @foodie_on_enfield and it received over 22k likes since the time it was shared. The dish featured in the video was from a restaurant in Surat, Gujarat. It featured two Pav buns which were sliced and drizzled generously with chocolate sauce. A chocolate-filled samosa was then sandwiched between the two and topped off with melted cheese and some more chocolate sauce.

Netizens reacted to the video and opinions were divided about the unique creation. Some thought it was an aloo samosa inside the Pav, while others didn't find it palatable even after knowing that it was a chocolate samosa. Users questioned the Chocolate Samosa Pav questioning its existence and why it was invented in the first place. "I'm a chocoholic! But this is definitely a "no no" for me," wrote a user.

Samosa is typically stuffed with Aloo, however, this fusion dish created it's own version.

What do you think of the Chocolate Samosa Pav? Tell us in the comments below!