Sausage and Bean Stew | Back to Basics 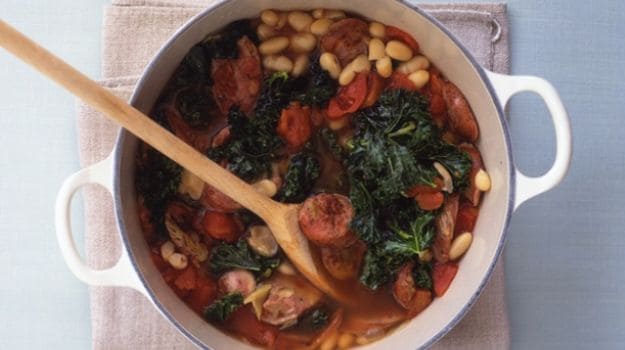 Learning to cook after leaving home is easy to do and this is a good place to start – a simple sausage and bean stew that’s adaptable, nutritious and cheap

Although I was brought up by a cookery writer, I never really learned to cook until I left home.

In the 70s and 80s, our family kitchen was the scene of non-stop experimentation, as my mum, Josceline, devised the recipes for her cookbooks. But her research was conducted behind a door strictly closed to her children, lest we disturb her meticulous measuring, testing and note-taking.

We did at least get to eat the results of her experiments. Often, dinner was strangely unseasonal; the publishing lead-time on her books meant that she tended to be testing salad recipes in the depths of winter and yuletide logs at the blazing height of summer. But at least ours was a catholic diet. My mother had spent much of her childhood in Syria and Peru, and our childhood dishes were often laden with exotic herbs and sweet spices.

We were never forced to eat anything we didn’t like, as long as we tried it. If you were unwilling to try something you could expect no mercy. I had a friend, Bruno, who claimed to have “food phobias”. Mum was always trying to catch him out. She would say things like: “So you have a phobia of eggs? Then you can’t have ice-cream. Who else would like some?” That’s a cruel and unusual punishment for a seven-year-old.

The long and short of it is that, by the time I arrived at university, I had very strong views about what I liked to eat, but absolutely no idea how to go about cooking it. During the day I studied quantum physics, while in the evening I struggled to work out how to feed myself. I tried and failed at oxtail stew (bouncy), fried mushrooms (greasy) and Irish stew (potatoes hard as pebbles).

What I needed, I now realise, is the recipe below. This is the perfect starter dish for the student cook: easy, nutritious and cheap. All the ingredients can be found at even the most underwhelming supermarket, and in any case it is open to endless adaptation. Sausages go fantastically well with all legumes, including lentils. My wife tells me that the staple dish of her student years was almost identical to this, but with brown lentils instead of cannellini beans. Later, when she got her first job and had money to burn, she upgraded to puy lentils and chorizo sausage. Sophisticated!

When my own children leave home, this is the recipe I will slip into their suitcases. That, and one of Mum’s cookery books – to inspire them in their own experiments.

1 In a large deep frying pan, heat the oil over a medium heat. Separate the sausages and prick with a fork. Fry in the oil for about 5 minutes or until the sausages are well browned.

2 Remove the sausages from the pan and add the chopped onion. Turn the heat down and cook for about 10 minutes before adding the crushed garlic and chopped rosemary. Stir well and cook for a minute.

3 Turn up the heat and add the chopped tomatoes. Simmer for another 10 minutes to reduce, stirring well. Pour in the chicken stock and bring up to a simmer.

4 Return the sausages to the pan and cook slowly for 10 minutes. Season well.

5 While the sausage pan is simmering, bring a large pan of water up to the boil. Add salt to taste and cook the kale in the boiling water for 2-3 minutes or until tender. Drain well and run under the cold tap to cool down quickly.

6 Squeeze out any excess moisture from the kale and chop it roughly. Add the chopped kale to the sausage pan along with the drained beans. Stir well to combine and cook together for another 10 minutes and season. If the stew seems too dry add a little extra stock or water.

7 Serve with a sprinkling of chopped parsley and crusty bread.

Other ideas and adaptations

•Add some diced red pepper, chilli and smoked paprika with the onions – the beans could be substituted for chickpeas for a Moorish flavour.

• For a more substantial, wintry stew, cook diced celeriac (or any other root vegetables) with the onions, and add English mustard and Worcestershire sauce with the stock.

• Try using spring or summer greens instead of kale – chard or spinach would work, too.

• For a deeper-flavoured sauce, cook some finely chopped carrot, leek and celery with the onion for a longer period of time – but without browning them. Add a little chopped pancetta to give the dish a smoky flavour.

• Use cooked pasta or barley instead of – or as well as – the beans.

Recipe by Jane Baxter. Henry Dimbleby is co-founder of the natural fast-food restaurant chain Leon (@henry_leon). Get your kids cooking at cook5.co.uk

Sausage and bean stew: the perfect starter dish for the student cook: easy, nutritious and cheap. And ‘all the ingredients can be found at even the most underwhelming supermarket’. Photograph: Anna Williams for the Guardian