Shilpa Shetty's last Sunday binge video has a special message for all those of us trying to keep our New Year's resolutions of becoming fit. 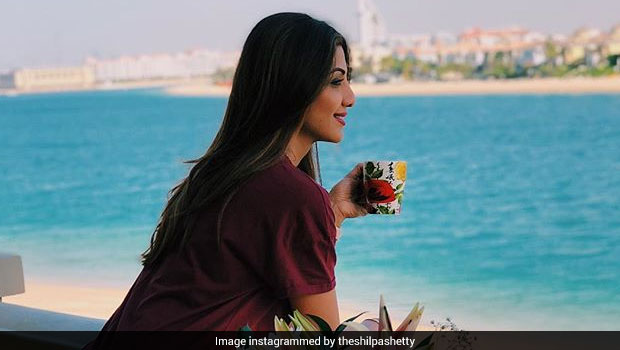 Highlights
Shilpa Shetty Kundra- the queen of binge eating- celebrated the New Year's in style. The Bollywood beauty was holidaying with her husband Raj Kundra and son Viaan Raj Kundra in Dubai and having the time of her life. Obviously there was a fair level of indulging in some amazing food involved and Shilpa didn't forget to post her last Sunday binge video of 2017 either. With the last day of the year being a Sunday, Shilpa celebrated her cheat day with a raspberry duet that was her late father's favorite dessert.

Shilpa posted a video of herself bingeing on the delicious flavored ice-cream from the beaches of Dubai and also encouraged her fans to not just 'make a resolution to break it. Make it to keep it.' She also urged her followers to make small lifestyle modifications for a healthy life and also promised many indulgent Sunday binge sessions along with more workout sessions in the new year.

"The lassst #sundaybinge of 2017.. celebrating the year gone with my late fathers favourite dessert .. Raspberry duet. Happy memories and looking forward to making many more.. muaah #gratitude #sundaybinge #happiness #lovemylife #byebye2017 #sweettooth" Shilpa Shetty wrote in her Instagram post. Shilpa follows a strict diet and fitness regime and doesn't eat any high-calorie foods during weekdays. But over the weekend, she indulges the glutton in her with any of her favorite fatty foods or desserts and posts videos of her now famous 'Sunday binges' on Instagram.

To rein in the New Year, Shilpa and her family traveled to Dubai where they booked an Airbnb for themselves. Shetty also posted several pictures of her New Year's revelry to Instagram, indicating that the diva had a fun last week of 2017.