Should I get up earlier to lose weight? 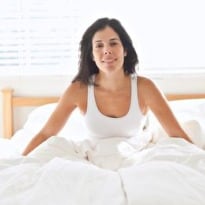 Recent studies have found that it is not just how long we sleep that can affect our weight, but when we wake up. Should we all be jumping out of bed at dawn?

Want to lose weight? Get a good night's sleep. Research increasingly suggests that chronic sleep deprivation can lead to weight gain. But last week a paper in the Public Library of Science's peer-reviewed resource PLOS One said that it is not just how many hours of sleep you get each night that matters, but when you wake up too.

People who were exposed to bright light in the morning had lower body mass indexes (BMI) than those who were exposed to most of their light later in the day. The finding was independent of the amount of calories eaten. Dr Phyllis C Zee, a senior author of the paper said that even 20 to 30 minutes of outdoor light before midday could affect BMI.

The magic brightness of light was found to be 500 lux (lux is the measurement of intensity of light at a specific distance from a light source). Outdoor light rates at 1,000 even on a cloudy day and 10,000 on a sunny morning. This is much brighter than indoor light, which typically rates between 200 and 500.

Early morning has more blue light (shorter wavelength light) that could have the strongest effect on circadian rhythms. The study was relatively small, though, using 54 volunteers with an average age of just over 30, who documented their dietary intake and wore wrist monitors to measure their light exposure (intensity and length of time) and sleep patterns.

So if stepping outside for a while before midday could keep your weight down, shouldn't you just do it?

The authors of the study suggest if we confuse our bodies over whether it is day or night (for example by using electronic gadgets at midnight or by not getting light during the day), the release of the hormone melatonin is delayed, which makes it harder for us to sleep.

Less sleep increases appetite by raising levels of the hormone ghrelin and reduces physical activity (through being too tired to move). Light in the morning reduces melatonin levels and helps maintain our circadian rhythms. The link between sleep deprivation and weight gain is quite strong. The Nurses' Health Study found that those who slept five hours or less a night were 15% more likely to become obese over the course of the study than women who slept seven hours a night.

A small study in the Annals of Internal Medicine found that lack of sleep led to fat cells becoming less sensitive to insulin, which could, theoretically, increase chances of obesity and diabetes. This study recruited people who went to bed later than most - on average around 1.30 am. This particular study may have limitations and, as yet, it appears that we may only understand part of the relationship between sleep and weight. However, it is safe to say that getting enough sleep (seven and a half to eight hours) and going outside for a short time before midday can only be good for you.

Photo: Studies have found that people who were exposed to bright light in the morning had lower body mass indexes. Photograph: Alamy