Summer Drinks: Rejuvenate This Season With These Fresh Chamomile-Based Drinks 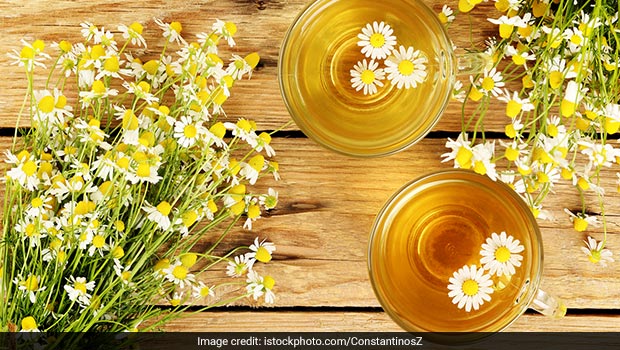 Popularly known as a relaxing herb, chamomile has been around for eons as a vital apothecary product. Ancient healing practices regard the many medicinal uses and calming effects of this versatile, tiny white-coloured flower. Chamomile belongs to Asteraceae plant family, which is also the aegis of other flowers like sunflower and marigold.  Chamomile flower is usually dried up before using it for food, beverage or cosmetic purposes. The fragrant oil extracted from chamomile is widely used in aromatherapy. But, it is its distinct flavour that anoints it as one of the most favoured ingredients in the making of refreshing beverages, especially herbal teas. Not just its taste, its health benefits are also acknowledged and leveraged by the way of healthful, soothing drinks, especially during this ongoing bolstering weather.

Advantages Of Having Chamomile-Based Drinks:

Chamomile is a great non-caffeinated alternative, which stimulates and energises your senses, just like coffee, tea or green tea. It lends a distinctive flavour of earthy and floral undertones that can uplift any drink and make it a delish one.

Here Are Some Refreshments You Can Make At Home With Chamomile:

Boil one cup water and infuse one tbsp chamomile flowers, leaves or one tea bag for 2-3 minutes. Strain and serve hot. You can add sugar or honey if you like your tea sweet.

Chamomile is a great non-caffeinated alternative

Seep one chamomile tea bag in a glass of hot water. Add one tbsp. honey and let it cool. Then, squeeze half a lemon and gin in the drink and throw in some cucumber slices. Top it with some ice cubes and tipsy, tasty cocktail is ready.

Boil one cup of water with one tbsp. honey. Let it cool; add small cubes of 1-2 peaches and blend the mixture until the peach is completely immersed in the water. Pour it into a glass. Add cold water and ice cubes and enjoy this summer cooler.

Chamomile is best known for its tranquilising and sedative attributes

Prepare one cup of chamomile-infused tea and let it sit to cool down. Add one cup of chopped strawberries, 2 tbsps. of yogurt one teaspoon seeds of your choice and blend. Add more water, if required. Have this soothing smoothie with ice and enjoy.

Add one cup of chopped strawberries, 2 tbsps. of yogurt one teaspoon seeds of your choice and blend

(Also Read: 13 Benefits Of Chamomile For Skin And Hair)

Summer means more drinking than eating. Including chamomile in your beverage diet plan will not only calm your mind and recharge you but will also let you procure its various health benefits.